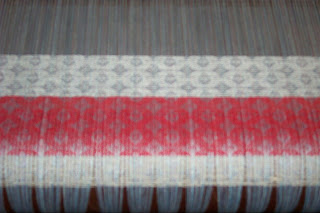 After the weekly errand run with my mom I came home and finished threading the warp and sleyed it at 24 epi (with the doubled ends counting as 'one').

This is the very beginning of the weaving. I keep left over weft on bobbins to use for headers, cut lines, testing colours and so on, so I began with the natural singles 20. It was difficult to see the pattern to check for oopsies so I switched to the red singles 20. Thankfully there were no threading or sleying errors, so I was able to begin weaving.

While threading, I continued to mull over my plan of using the white singles for weft, and after comparing it to the singles 20 noting that the white was much finer than the singles 20 (in spite of being labelled singles 12, both on the cone and the invoice) decided that I had to double it. Especially for the floral motif. So I dragged out my trusty doubling stand.

The resulting fabric is open and not suitable for towels, but the length of the floats would rule out use as towel fabric anyway. It would, however, make really nice fabric for a window covering. It's light enough and open enough that it would not block out the light entirely, but would provide sufficient privacy.

Once again I'm weaving this fabric up-side-down in terms of which side will be used for the face. No real reason except that I used the draft as given, which was probably written for a counter balanced or countra marche loom.

The draft is taken from the monograph done by Pat Hilts for Ars Textrina. She translated two old German weaving books of patterns. Many of the patterns are similar to Irene Woods monograph The Fanciest Twills, another book I often peruse for ideas. A third resource is Olesner's book.

Yes, I could draft these patterns from scratch, but when I have a concept of what I want, I will sometimes flip through these old books until I see something close to what I want. Sometimes I find precisely what I want, in which case I give a nod to the resource, thanking them for not having to spend a couple of hours at the computer clicking the mouse. :)

Sometimes I take their draft as a starting point and adapt it to my vision. In this instance, I was just looking for something to weave for the Seattle Guild newsletter, and somehow weaving flowers in deary November seemed very appealing.

PS - while winding a bobbin, the cone on the top of the doubling stand had a break in the thread and I lost the end. The yarn is so fine it's difficult to see, and finding the broken end proved fruitless. Inspiration struck, and I grabbed the lint roller, rolling it around the cone in the direction the yarn was winding off the cone. It only took a swipe 1/4 of the way around the cone for the broken end to be caught on the sticky roller, saving minutes - possibly quite a few minutes - not to mention the frustration. :D
Posted by Laura Fry at 7:21 PM

Wow! If that's the back side of the fabric, I can't wait to see the front. I love the back, but I tend to like backs more than fronts when I weave, too, so this isn't surprising.

When that happens to me in spinning, I use a piece of scotch tape to find a lost end. Sounds like it works just like the the lint remover!

Hi Benita, the front doesn't look all that different, just reversed where the colours will show. I just happen to prefer the other side. :)

The lint roller would be too big for a spinning wheel bobbin, but yes, it's the same idea. Probably got the idea from my spinning friends who also use masking or scotch tape to find hidden ends. :D