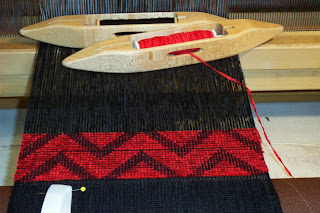 This afternoon I tied on and started weaving on the Diversified Plain Weave warp I had prepared a while ago.

Given the complexity of the threading, even though I used a simple point progression for the units, it was a good idea to start with something simple to prove that everything was correct.

In fact, everything wasn't correct - I'd made a simple error in the treadling and while fixing it I left a slight imperfection in the spacing of the wefts. It may come out in the wet finishing, it may not. If not, I guess I have a new scarf. ;) Or it can go as a gift to someone who doesn't mind my 'seconds'.

It also became apparent that I did not have the tension set properly on the two warps - the fine warp was too loose - the thick warp was too tight.

I also realized after I'd tied on that I ought to have used the cheese grater breast beam but hopefully I'll be able to weave at least a couple of scarves before the sandpaper beam stops gripping. When that happens I'll have to cut off and insert the other beam, tie on and set off once more. Since this is such a narrow warp it may even go to more length before I need to change it but when it fails it generally fails catastrophically so I'll probably be a bit conservative and cut off before that happens. Hopefully. 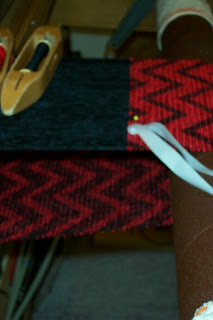 The pattern in Diversified Plain Weave is balanced but opposite colour will show on the two sides. In other words, what is red on the face will be black on the back. You might be able to see that on the face there are thick red stripes and thin black ones while on the reverse there are thick black stripes with thinner red ones.

When this situation exists, I will tie up my loom so that I lift the fewest possible shafts. Which means that for some of my patterns I may well be weaving them back to front.

I also need to bear in mind that what I am weaving are scarves which generally get draped over someone's shoulders. What will be upright at one end of the scarf will be upside down on the other. So motifs that are directional will quite often get alternated in their orientation.

While I have a number of ideas for motifs/patterns I've not actually hammered them out so my next task will be to start generating the liftplans (treadlings) for more.

Weaving on this warp is, as expected, very, very slow. But right now that's not a bad thing. :)

Thanks for sharing this, hopefully the line will come out in the wash. These scarves will be beautiful, and with the rayon chenille will have a great drape to them. You are a brave weaver to work with rayon chenille. Good luck with the rest of the warp. F.Y.I. if the line does not come out in the wash ..... I would be more then happy to purchase it as a "second" to wear and enjoy and be proud to have. Keep that in mind "at the end of the day", or should I say, "at the end of the finishing process".
Weaverly yours ....... Barbara

The "cheese grater breast beam" vs. the "sandpaper breast beam?" Huh? My breast beam is really smooth, and I thought that's what was best. No?

P.S. I read you regularly, but this is the first time I've commented.