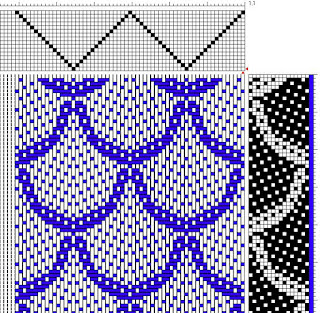 A few years ago scientists began to put together the idea that birds were descended from dinosaurs and when you look at baby birds, there seems to be a definite resemblance!

There are also similarities between feathers and scales.

My next warp (once the one I just put on the loom is done) again uses blue hues.  Somewhat reminiscent of peacock colours, I am using this 'scale' design and will be crossing the light/medium value blues/blue greens with that dark cotton that appears to have not aged well.  Not well enough to use as warp, at any rate.

It will serve just fine as weft for towels, and I think it will make a very nice textile.

And that is what life is all about, too.  Compromises.  Plan Bs.  Accepting something less than 'perfect' when it is 'good enough'.

Yesterday the local Community Arts Council announces that it was not going to hold the biggest craft fair of the community.  I was disheartened that so many people were making really negative comments, saying they would never support the fair again.  They said they were going to boycott because they were 'supporting' the artists.  Um, how does boycotting next year's fair support the artists who will participate - when it is safe to do so?

Instead the CAC will work at holding an on-line event.  If they offer consignment sales for their members, I will participate that way.  The fibre arts guild will be exploring if it might be feasible to hold a sale in the guild room, as we usually do early in December.

Just because there is a pandemic doesn't mean we can't do things.  We are just going to have to do them in a different way.

I am just back from the cancer clinic where I had my blood draw.  I am now on tenterhooks until Monday when I get the results back.  I think, I hope, I am still in remission.  But I will know on Monday.
Posted by Laura Fry at 10:21 AM

I am so with you on those negative Nellies. Really. What are they thinking? And do they really think it’s wrong to do an online event, and would be right to do in-person in these times? Selfish. That’s my opinion of their responses.

Hoping you are correct and your remission continues!

They didn’t read past the headline where the plan to go in line was also announced further down the page. Some days I despair at people.