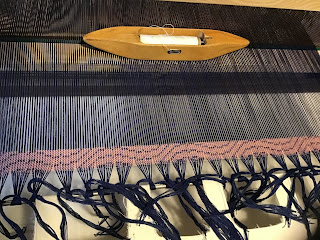 There is a saying going round the internet:  Don't cling to a mistake just because you spent a long time making it.

I think people, as a whole, would be a lot better off if they accepted the fact that mistakes occur and when we spot them, we should either accept them as they are, or take the time to fix them.

This warp is very dark - almost black.  During the setting up of the loom I had a mis-thread - two ends in a heddle with an empty one beside it - which I discovered very quickly after making it and was able to put it right immediately.

Another end had gotten wrapped around a bunch of others which would have caused issues with the shed and again, that got fixed before I ever started weaving.

The one I left?  Two bouts had somehow swapped places.  (I beamed this warp sectionally - each bout is one inch,)  I wasn't sure that would actually cause a problem in the weaving, so I left it and wove the header.

All seems to be well so I am leaving that one and will rethread after I've done one towel if it appears to be causing an issue.  It's the last two sections of the warp so if it compromises the selvedge, I will cut off and re-thread those two inches.  In the meantime?  It seems to be ok so I'm leaving it.

The above photo shows about 1.5 inches woven in a contrasting colour.  As it happens, I've been using this yarn as cut lines between towels to make separating the towels easier.  It was a nice contrasting colour and showed up the design nicely.  I could have used the white I'm planning on using for weft, but hadn't brought the white over to the loom yet so just grabbed the 'waste' yarn since it would do the job nicely.

And yes, I'm weaving the yarn directly off the tube.  The Brassard cardboard tubes fit nicely into the Leclerc shuttles so it will save me the time of transferring the yarn to a bobbin.

Today I will begin weaving.  I'm hoping the block twill will work well with such a high contrast weft on the very dark warp and not look 'dingy'. If it does I have other lighter blues that could also be used up.  I'm just trying to get rid of this white because all those nearly empty tubes take up a lot of room given how much yarn is actually left on them.

Weaving is labour intensive.  Mistakes happen.  Taking the time to fix a mistake depends on the weaver and how readily they are to either live with a 'mistake' or not.  But don't cling to it just because you spent a lot of time making it.  Most mistakes can be fixed.  Sometimes they can be fixed with The Scissor Solution.  It depends.
Posted by Laura Fry at 9:47 AM

I weave with the ends of my Brassard tubes as bobbins all the time. Glad to see I’m not the only one.