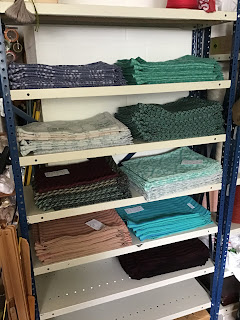 I would have to go back to March posts to figure out if these are all of the towels I've woven since Covid-19 became a reality here, but it is pretty representative of what I have been doing.  There might actually be more in the other room - on the shelves where we have run out of room to store more.

Each stack is a warp and some of the towels no longer live here, having been given away or sold, but it is safe to say that each warp has been taking 14 to 20 days to weave.  Some were slower than others because of pain.  However, I am much improved now and generally manage one or two towels every day, then three days to set up the loom with the next warp.

It doesn't look like much, but then, I am supposed to be retired so productivity isn't as much of an issue any more.

This morning I thought about someone I knew, a long time ago.  She was quite a bit older than me (nearly all weavers were, in the beginning) and had been living with cancer for a very long time.  But through it all, she kept weaving.

After a very bad winter one year, a group of us stopped in to visit with her as she was too poorly to attend the conference we had all been to.  She told us the story of nearly dying in February of that year but rallied when she remembered all her yarn stash, wondering what her husband would do with it!  And so she came home and was weaving again.

We went to look at the loom and we spotted some 'mistakes' and basically swarmed her loom to fix them.  She stood back, looking a little oddly at us, doing what we thought of as a kindness, fixing the issues we could clearly see.

I think I understand now.  Those mistakes?  They weren't important.  The fact that she was, at the ripe old age of 80?  Using up her stash?  That was what was important.

She stood aside and let us fix the problems because clearly it was important to us to get them fixed.  And I'm sure that when we left she might have appreciated that they had been done.  But I wonder now if they just didn't matter much in the grand scheme of things.

As I go through my own weaving, I see issues.  These towels are far from perfect.  The selvedges are not always straight, the beat isn't always consistent.

But I find that I can't bring myself to care overly much because the important thing right now?  I'm weaving.  I'm using up my stash, including some yarn from Dorothy's that I bought after she died.

These tea towels, as imperfect as they may be, will still dry dishes or hands.  I hope they will add some colour and brightness to someone's life.  That they will be...useful.

The fact that they are not 'perfect' just doesn't seem to matter much any more.
Posted by Laura Fry at 12:26 PM

I am 95, - still weaving. Not perfectly, but as you say, it doesn't seem to matter so much anymore! The dishes don't mind an imperfect tea towel and the family seems to love whatever comes their way! The mailman brought me a box of cotton and silk from Jane Stafford today, - can't wait to start winding warp!

Can I be you when I grow up? :D Happy weaving!