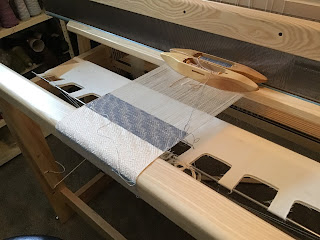 I spent the better part of today getting the test warp ready, then failing to get the loom to run.  Stopping for lunch, then a quick trip to the chiropractor, I thought of one tiny thing I might have forgotten to do to make the loom's built in software work, and when I got home checked.  Sure enough, while I had saved the file in .wif format?  I had not used the liftplan option.  A quick edit to the file and I was able to get the loom weaving.

But I don't much like the built in software after using Fiberworks, so I thought I would try once more to see if I could get the loom to talk to the laptop via Fiberworks.

Once again the message 'com port failed to open' appeared on the screen and then just as I was going to go back to the Louet software, a further message popped up - 'restart to finish setting up changes'.

So I shut everything down on the laptop, set it up to make changes and restart and came back a few minutes later.  Watched pots never boiling and all.

Once again I opened Fiberworks, selected 'weave' and once again got the 'com port failed to open' message.  Then I figured what the heck, all the settings said the com port should be valid, and without much hope I stepped on the treadle.  And what to my wondering ears happened?  Solenoids fired.

OK, let's see if it is actually going to work.  Stepped on the treadle again and a shed opened.

Again, and the next shed opened.  And again!  So I started weaving and amazingly enough I was able to weave for over an inch with each shed opening.

However, after fighting with it for over two hours today, I was wrung out.  It is also going to take more than an hour to weave a scarf, so I shut everything down and will try again tomorrow.  Which will be the true test - can I get this working reliably?   I know dozens of people all happily weave on their Megado Looms.  I should be able to as well.  My love/hate relationship with computers notwithstanding...

Now that I've managed to get the loom working once with Fiberworks, I am cautiously optimistic that tomorrow I will be able to complete the first test scarf.  I know I put a little extra on just for the purpose of testing, so even though I've used up about 8" of warp, there should still be plenty for two scarves.

I have also learned that I need the standard shuttle because the low profile one keeps submarining.  I am getting comfortable with the rate of weaving which the loom seems to prefer.  It's a bit slower than I'm used to, but I am trying to remind myself, daily, at times hourly, I no longer need to weave at 110% efficiency.  I will be retired from production weaving in less than three months.  It's ok if I work at a slower pace than 'usual'.

So I end today cautiously optimistic about tomorrow.  And will go weave a rayon chenille scarf and try to find my zen mindful/mindless weaving.

Small steps. Today was an accomplishment. Looking forward to reading the rest of the journey.