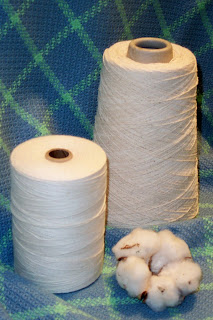 Over the years of my career, I have struggled with the whole issue of sustainability and the fibres I use in my practice.

When I first began weaving, I tried everything.  And by that I mean everything.  As I learned more about how fibre is grown, how it is made (synthetics), spun/dyed, the life cycle of natural and synthetic fibres, I eventually made some decisions that I tend to follow.

A friend educated me on the meaning of 'organic' and that it doesn't necessarily mean that no pesticides are used, but only approved ones.  Click on the link above for the entire article but here is a quote from it:

"Organic cotton, however, is grown without chemical pesticides or harmful fertilizers, which is why is it often seen as more environmentally friendly than conventional cotton. This does not mean that organic cotton is free from all pesticides or insecticides, however - organic cotton farming does allow for the use of natural and synthetic pesticides in moderate quantities. In turn, these natural pesticides can also be harmful. For example, Rotetone is a natural pesticide which was used in cotton farming since the 1800s until it was found to cause symptoms similar to Parkinson’s disease in rats. In 2011 a study from the US National Institutes of Health indicated a link between rotenone use and Parkinson's disease in farm workers, but the natural pesticide is not included on the FDA ‘white’ list. In addition, a study funded by the Natural Science and Engineering Council of Canada on four synthetic and two organic insecticides found the two organic insecticides to have a significantly higher toxicity than the synthetic counterparts."

There are so many steps along the production line, fibre to cloth, and there is the opportunity for impact to the environment at many of them.

So, my personal line in the sand is that I do not use anything that will not degrade back into dust.  I do use rayon, but have become concerned about the negative impact on the environment, yes, but also the health issues for the human beings who work in the factories where rayon is produced.  Once I have used up what I have, I will not buy more.

I think about the fact that as a weaver I add to the surplus of textiles we have in the world.  I take some comfort in that my textiles are 'slow' cloth:  my textiles are made by hand and will wear for years - in some cases, decades.  Which is another definition of 'slow' cloth in my books.

My advice is to learn as much as possible about how fibre is produced and the processes used to make it into cloth.  Or at least into the fibres and yarn that we, as spinners/dyers/weavers etc., use to create our textiles.

Many people are now growing their own fibres, be they shepherds, flax growers, silkworm raisers, etc.  Learn as much as possible about environmental impacts, not only of natural fibres, but synthetic ones.  Make informed choices.  Pay attention to the source of your information.  If it is from the Cotton Council, they may not be presenting good information about other competing fibres.  If it is from a website promoting organic, they may not be telling the entire story, either.

Find out who is giving you information and seek out other sources of information.  In this day and age of 'fake' news, propaganda is rampant.  Think about who is telling you what (e.g. PETA and their misleading campaigns about wool) and be skeptical until you can confirm the information with other sources you trust.

So, cotton uses enormous quantities of water and pesticides.
Flax will strip nutrients from the soil which must then be remediated  after each growing season, plus the retting may release toxins into the environment.
Silk worms get stifled in order to preserve the long filament they have extruded.  Best quality get fed mulberry leaves.
Wool comes in an almost infinite variety of staple length, crimp, fineness/coarseness.  According to a large animal vet I know, mulesing is not practiced in North America, even in large flocks.  The animals are NOT butchered to obtain their fleece, they simply get a haircut.  A good shearer takes very little time to shear the animal who then enjoys a much cooler summer.  Domestic sheep MUST be shorn because they cannot shed their fibre as wild sheep can do.

Mulesing has also been outlawed in New Zealand, as of October last year it became illegal to be done, even by vets under anesthetic. It had been being phased out before that too so NZ wool is free from cruelty in general. I'm a spinner and I know people in the industry who are all very careful about the treatment of their sheep at all times.

Good to know. Thanks, I had not heard about that.

An interesting discussion on fibers and their consequences