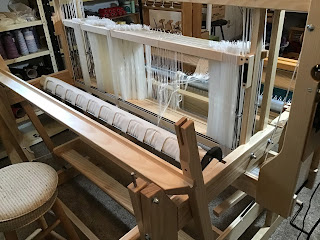 Today I worked at making friends with the Megado.

It is very different in a number of ways from the AVL and so I'm having to tweak this, try that, not entirely satisfied, but knowing that the learning curve is always very slippery at the beginning.

Not entirely sure I had enough yarn to beam a 10 yard long warp I cut back to 6 and a bit yards and it was a good thing I did because a couple of spools ran out and a couple more were getting very close to used up.  Which is A Good Thing, but still, I didn't want to run out in the middle of a longer warp.

There are a number of differences that I am going to have to figure out and the big one today was the sectional beaming.  I didn't much care for the Louet tension box, so asked Doug to retrofit the AVL tension box.

However, it happens that there were some wrinkles in doing that and I am going to have to try another test warp and see if I can't smooth things out in a way that will work for me.  Let's just say the tension isn't great, so another good reason to cut back to a much shorter warp.

When this warp comes off I will do another test scarf warp, again 6+ yards, and see if I can't get better results.

There are other quirks of the loom that are different, like not being able to lift the shafts easily.  At least not that I can see currently.  I will look more closely once the warp is off again and see if there isn't a way to move the shafts individually.  I had thought to raise the shafts to make them a little easier to thread but couldn't figure out a way to do that.  Yet.

I'm not entirely loving the TexSolv cord at the ends of the shafts, which look like they absolutely must be in the groove in order to lift the shafts properly.  They kept popping out as I threaded and finally I just left them and will put them back in before I fire up the loom to actually weave on it.

Happily I discovered that the breast beam can be lifted off easily and was then able to get close enough to the shafts to thread the warp.  And as a temporary measure I was able to direct one of the work table lamps to the back of the shafts so that I could see to thread.  This will become very important as winter comes on and we have very short, often grey dreary days.  I may get Doug to mount fittings to the loom so that I can add lamps to the front of it.

I had hoped to beam 20 yard long warps, but the back beam is quite small which means lots of cranking.  On the other hand, I no longer have to weave at production levels.

All the tweaking, trying this, trying that, meant that dressing the loom took a lot longer than I had hoped.  But it's beamed and threaded and the reed put into the beater.  Tomorrow I will sley and then fire it up and see how it goes.  I can always sacrifice the warp if the tension issues become too great.  The silk was a gift, so not much invested in it in terms of money.  My time is far more precious to me right now so if it looks like I won't get a good quality textile off this warp, I will make the sacrifice to the Megado loom goddess.  She is new here and may need some bribes to co-operate.
Posted by Laura Fry at 4:54 PM

The beater isn't actually in my way. The breast beam was. So I was relieved that it simply lifted off. :)