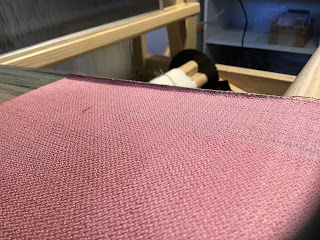 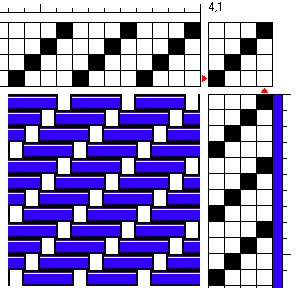 draft shows the path of the weft and warp

It is a fact that - like stockinette stitch in knitting - a 1:3 twill fabric will curl at the edges.  There is really nothing that can be done to prevent this.  Not a floating selvedge or temples.  It will curl.  A 1:3 twill will curl upwards as in the top photo - a 3:1 twill will curl downwards.

It is in the threads.  What the draft above does not show is that the weft thread will curl around a thread three in from the selvedge, then two, then 1, then will catch the outermost selvedge end.

This is not a problem because during wet finishing, including a good hard press, the selvedge will resolve and everything will settle.  When this cloth comes off the loom and is wet finished, the selvedge will be pretty much straight because it is all woven with a 1:3 twill.  (I prefer to lift the least number of shafts so the other side is actually going to be more interesting and considered the 'right' side of the cloth.)

On some of my tea towels, woven in designs that exchange twill blocks of 1:3-3:1 twill, the selvedge may not be ruler straight, but over all will keep a straight edge as the twill blocks change from weft to warp emphasis.  Since this slight waviness does nothing to prevent the textile from doing its job I do not consider it a 'flaw'. 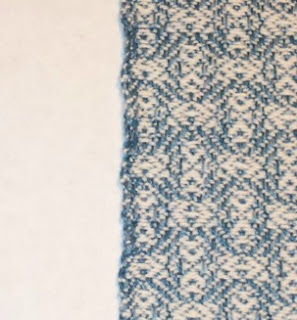 With so many commercial fabrics being woven without a woven selvedge we sometimes forget that the selvedge is just the edge of the fabric and we can create textiles to purpose to a specific width and have it sport a woven edge, not a 'raw' one.

(Why is it 'raw' or 'unfinished'?  Because with the rise of newer technology looms, each weft is cut from the cone and laid into the shed as a single thread, not a continuous one.)

I find it somewhat amusing that raw edges are so common now that a woven selvedge is sometimes referred to as a 'tartan' selvedge.  What they mean (in regards to a tartan) is simply a woven 2:2 twill has been woven with continuous weft (multiple weft colours are run up along one selvedge in loops.  This selvedge is then used for the kilt waistband and no effort is made to cut them and tuck the end into the cloth.  With many colour changes, there is a possibility of that selvedge building up further than the rest of the cloth.)

The further from the breast beam, the more the cloth will curl.  Another good reason to keep the fell in the 'sweet spot'.