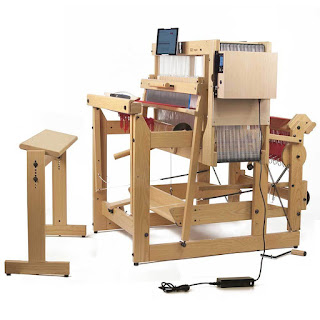 When I started weaving in 1975, most people had four shaft looms.  Some few had 8 (this was in North America - Europeans had looms with more) but more than that was very rare.  There were a few 12 and 16 shaft looms but they were not particularly common.

What drew me to weaving was being able to make complex patterning.  As such I got an 8 shaft loom fairly soon after starting to weave, but the loom itself wasn't a good fit for me.  As I learned more, I discovered dobby looms - the Llangolyn from the UK but also the AVL which was fairly new on the market.

As an aspiring production weaver, I was looking for lots of shafts, but also a level of efficiency that would make it easier to actually earn some money.  After reading Allen Fannin's book Handloom Weaving Technology, I settled on the AVL.  The deciding factor was that it was available in the US and it had a shorter height which would actually fit into my basement studio.

The AVL served me well for the better part of four decades (1981-2019) but Life Happens and it was time to get rid of it.

I found myself mourning the loss of the 16 shafts, sectional beam, computer assisted dobby.  I could live without the fly shuttle - hadn't actually used it for nearly 5 years - and the auto cloth advance (although that one really is lamented!)

After a few days of trying to figure out what I was going to do, I remembered weaving on the Megado not long after Louet rolled it out.  The lasting impression was how little physical effort it took to weave on, something that was getting more important to this aging body.

Over the years the number of shafts available on the Megado had grown to 32.  I looked at the website, considered upgrading to 32 shafts, thought about my poor eyesight and what it would take to actually thread 32 shafts...and walked away from the thought.

How many shafts did I need?  I had been weaving with 16 for 38 years and while there were times when a few more would have been nice, they were too few to really make spending the extra money a reasonable expense.

So how many shafts does someone need?  That is, and always will be, a personal choice.  So I tell students to buy what they can afford and can fit into their environment.  They might begin with four, but if there are more shafts available, they might find they want/need them in the future.

One of the things that happened this past weekend is that I was dressing a small lever loom for the loom dressing demo.  I had offered to weave a sample for someone and it required six shafts.  So I had borrowed a small 8 shaft lever loom.  It happened to have two warp beams, which meant we had a discussion about why one would want/need to have two warp beams on a loom.

I had samples I had woven showing using two beams and we had a good talk about what is possible and why one might want additional mechanical assistance - like more shafts, double beams, a computer assisted dobby.

If more mechanical assistance can't be justified in someone's budget, then it is time to get creative - how can someone exploit the equipment they have to be as creative as they can be?  As a new weaver learns more about how threads interlace to make pattern/design, the better able they are to bend the rules. 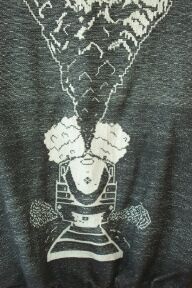 The pattern on the jacket was woven in pick up.  To weave this design using a shaft loom would have required way more shafts than any hand loom comes with.  I would have needed, at best, a draw loom or ideally a Jacquard.

But using a pick up stick, I was able to weave this design over the course of a few days, an hour at a time.  Probably why the beat isn't perfectly consistent (which bothers me, but not a lot).

The thing is, if a loom isn't a good fit, it can always be sold on and a different one purchased.  I have been through a lot of looms over the years.  It's kind of like a car - as your needs change, a different car might be a better fit.

Oh yes. About the loom, but right now about a car. None of the choices is forever.
I have the loom that fits in my space. Until I have figured out everything I can do with it I don't need an new loom. A newer car however is a different kind of choice.