In the beginning, part II 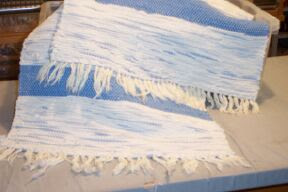 So, how did I actually begin? I told Syne Mitchell the short version of how the universe, angels, what-have-you, worked very hard to get me seated at a floor loom shuttle in hand, for her WeaveCast podcast episode 10. http://www.weavecast.com
The story is a long one - the universe worked very hard to get me on that loom bench - so you might like to listen to the interview. Or read the transcription.
At any rate, the first time I sat at that very first floor loom - a Swedish style counter-balanced 4 shaft, it suddenly dawned on me that this was where I was meant to be all along. :)
Pictured here is my very first weaving. I keep it handy to keep myself humble! Although when I look at it now, my selvedges were pretty decent for a first weaving........
The thing is, weaving this rug was really the experience that made me the sort of weaver that I am today. You see, I started class a week late, so I phoned the instructor to let her know that I was registered but would miss the first class and what did I need to do to hit the ground running when I did appear?
She mused a few moments, then said I could begin with a rag rug, and to bring some rags with me. I had an old cotton sheet with blue and white stripes and a blue hem, so I carefully cut the hem off, ripped it and balled that up, then ripped the sheet lengthwise following the stripes.
When I arrived at class, I was pointed toward the loom with its seine twine warp, and that was about all the instruction I got. No one mentioned I should weave a header, so I just began right away with my rags.
Carefully measuring out half of the blue so I could do a blue stripe at each end, I wove merrily away until I was finished, and was told to go ahead and cut it off the loom.
Again, no one told me I should advance the warp because cotton seine twine is stiff and has a mind of its own! You can guess what happened as I cut the rug off the loom - hanging beater swaying, warp ends slithering out of the reed, threatening to slide right out of the heddles!
I put the rug on the loom bench and hastened to the back of the loom to let off more warp, and as I did so, the rug fell off the bench onto the floor. Spewing rags out from between seine twine ends as it did!!!
One of my classmates happened by and swooped down on the rug. "OH! Your rug! It fell on the floor!" she exclaimed and bent to pick it up.
With visions of the entire thing falling to pieces I commanded her to stop and leave it alone.
"But, but, but" she sputtered. "it's on the floor!"
I stood up and walked to the front of the loom and firmly stood on the rug.
"It's a rug" I said. "It belongs there."
Posted by Laura Fry at 12:19 PM 7 comments: I've been thinking about starting a blog for a while, now, but since I already had a website, wasn't sure a blog was "necessary".
This year, however, has seen some radical changes in my life and after 33 years of being a professional weaver, it is time to make some changes.
While I chose weaving because I wanted a career in which I wouldn't get bored, I have to be honest and say that in reality, weaving chose me.
Weaving has been an intellectual pursuit that quickly became a passion. I can't imagine my life without weaving. But my new health reality means that how I weave has to change. I suppose that this blog is partly intended to be a journal of just how weaving and me will accommodate each other into the future.
Since the beginning of August, when I finally felt able to weave I have completed two warps, and today beamed another. I have a lot of 2/20 mercerized cotton, and have been using it up making tea towels. The last warp was a solid dark blue warp, but I still have lots of that yarn left and wanted to do something a bit different.
Rummaging in my storage area, I found small quantities of 2/20 merc. cotton in purples, greens and blues. I wound those off onto spools and set up the bobbin rack, beginning with the section in the centre of the warp. Working to each side of centre, I wound sections, changing out empty spools with tubes of the dark blue. The warp is 22" wide and 30 yards long.
Tea towels are a great way to use up stash, but I've got lots of tea towels now, so decided to make a few shawls, too. For weft I'll use up some 2/10 Tencel, hand dyed silk boucle, perhaps some bamboo. I'll see how my sampling at the beginning of the warp goes.
Posted by Laura Fry at 6:55 PM 5 comments: