Meg has started a tradition of posting photos of one's looms on the first day of the new year. 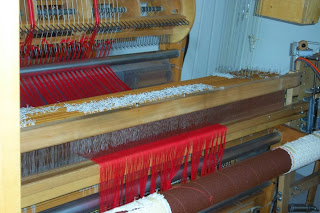 The AVL has the tatters of the very red Swedish Snowflake table runner warp left on it.  I quite often don't bother stripping the dregs of the old off until I'm ready to put the next one on.  Nothing sadder than a loom that is completely empty? 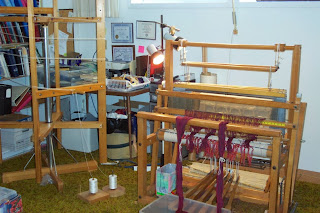 Instead of dressing the AVL, I am setting the small loom up with the next of the towel warps.  Here it is at 10:30 am, ready to be beamed.  To the left is the warping mill.  No, that's not a guide string on the mill but the first pass of the next warp.  Just like with floating selvedges I don't use guide strings on the board or mill, just allow the first pass of the warp itself to be the 'guide'. 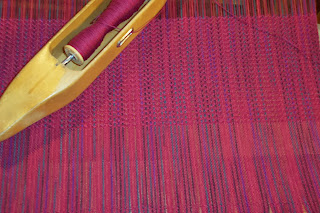 Things went more slowly than usual today as we awoke to a rather large 'distraction' entailing lots of phone calls, emails etc.  Mostly it was Doug affected, not me, but the general air of distraction served to keep me a little off balance, too.

I did, however, get the planning calendar for 2015 started.  Still have to go through the '14 one to make sure I'm not missing any dates.  Like Fibres West - the intention was to apply for a booth there when we got home from Seattle in December but while doing the calendar this morning realized my round tuit must have gotten misplaced.  So that will have to be done and into the mail tomorrow.  I'd intended to apply to present a seminar but may be too late now.

At least the looms are not completely empty.  With any luck I can keep them going for the coming year.  I do have a rather large stash to weave up after all.
Posted by Laura Fry at 3:35 PM

You have round tuits in Canada also? Gee, I wonder if we imported ours! Have a beautiful 2014, Laura.

I was hoping for less stress but if today is any indication....
Cheers
Laura