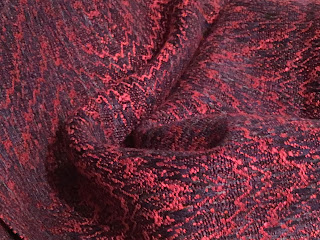 After wet finishing including a hard press and a final 'burnishing' with the hand iron, the new scarves are (almost) finished.  This afternoon I will trim the fringes, then tag/price them.  I found a tube and will roll them around the tube for transport, in part because the boxes are all loaded into the van and it will be easier to just pack them in my suitcase - but I don't want to set creases in them.

Major life changes are considered major stressors.  Shutting down one's business and making a gigantic change in how one spends one's days is surely up there in the top 10.

One of the ways I deal with stress and complicated emotions is to vent.  My mother never approved of such 'venting' - her watch word was that one never aired one's dirty linen in public.  I find that if I don't, the stress becomes anxiety and the anxiety turns into fear and anger.

I use this platform as a way to work through my emotions.  By writing them out (a therapeutic tool I learned about in my 30s) I can tease out what is actually bothering me, see my way clear to a path through them, discover the silver lining in the current cloud.

Several people have encouraged me to continue blogging even as I down size my life.  Be assured I will continue to post, even as my focus shifts from production to...who knows what.

Life is complex.  Emotions are complicated.  My friends allow me to talk through my difficulties and once the pressure has been released somewhat, the kernel of what is bothering me becomes more visible.  Once it is visible, I can begin to reduce the influence the issue has been having over me.

I made the decision to be public about my health issues when I began this blog in 2008.  For most of my childhood, cardiac and cancer were spoken about in hushed voices.  Especially cancer.  It was as though someone 'catching' cancer had done something to cause it.  And during most of my childhood, both cardiac and cancer were pretty much death sentences.

As part of my cardiac recovery my medical team made sure I understood that people dealing with cardiac issues needed to be aware of the emotional impact.  The cancer team has a social worker attached to it, because again, major life challenging issues are involved.

Being public about each meant that those people who have similarly experienced these health issues contacted me to encourage and support while I was going through treatment - and the aftermath.

Discovering that so many of you have or are dealing with the same thing(s) became a huge positive impact - because y'all had survived!  And there was hope that I could too.

So yes, I'm discombobulated right now.  Yes, I'm struggling.  Yes, it's challenging in a way that I wasn't ready for.  And yes, I will continue to write about this journey.

I have no idea what the future holds, but seriously?  None of us do.  We make our plans.  God, in her wisdom, laughs.
Posted by Laura Fry at 9:11 AM