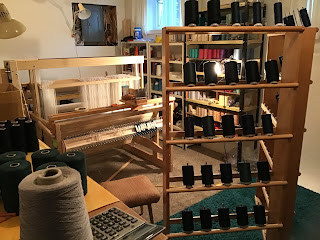 The Megado is definitely a different loom from the AVL.  There were many things about the AVL that worked for me very well and beaming sectionally was one of them.  The beam of preference was up high which meant I could stand and turn the crank, cut off and tape the section, then easily attach the leader string to the next.  And all the while, the sections were visible and I could ensure that the 'ribbon' of warp was going into the section flat, not bunched up against one or other of the dividers.

The Megado is a much smaller loom with a lower profile.  The beam is down low and the first couple of warps I struggled with the new location and how best to address filling each section.  Part of the problem is that the sections are below the back beam and the box 'race'.  I'm using the AVL tension box because I prefer it over the Louet that was supplied.  For one thing it has a 10 dent reed to guide the threads, and the reed mount swivels, so I can make the ribbon narrower if necessary.  Or do a compound sleying to keep the ribbon about the correct width.  The AVL beam was also a full yard, while the Megado is just 14".  So lots more turns to get the same warp length.

I didn't like working in the shadow, needing to bend over to be able to see if the ribbon was laying flat so this time I added a light to illuminate my actual work area.  Especially with this very dark warp which is mostly a very dark navy, 4 fairly dark green and the rest black.  Hard to see in the first place, then even more so on another gloomy day, in the shadow of the loom.

The stool is the exact height that makes the job do-able, but it means leaning over to crank, especially on this wider warp, so I'm taking more frequent rest breaks to make sure my back doesn't get too...cranky...in doing the job.

I am also having to tweak my hand motions - how and where I tape the bouts, then tie off the ribbon for the next section, then attach the leader string.  After 20 sections, it's becoming smoother and I'm not having to stop and think about it every single time.  But it still isn't my new default, and may not be even for the next few warps.

My goal is to get this warp beamed today and begin threading.  There are 1080 ends in the warp and it is going to take a while.  I'm hoping to get it threaded before we leave, but if not it will get finished when we get home.

The threading is a re-run of the last tea towel warp I did on the AVL, adjusted for this wider warp.  The tie up and treadlings will be changed.  It is a 'fancy' twill over 16 shafts, with the motif repeated across the width and straight draw borders.

As a test warp, it will do.

The warp should be long enough for four shawls.  I will use the same red, blue and purple for three of them, then finish with a slightly finer grey rayon slub.  For that I will most likely add extra interlacements to increase stability.  The scarves have a lot of drape so the shawls should as well.  I may beat a little harder because wider warps generally have more resistance than narrower ones.  And a slightly denser (more ppi) cloth will also have more stability than one with less.  I think that might be A Good Thing in a shawl.

Change one thing...everything can change...
Posted by Laura Fry at 10:29 AM