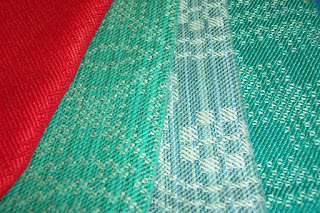 Show Two is now over.

It went ok, as shows go.  I met some lovely folk, got to share what the future holds - so far as I know it.  Let people know where to find my textiles now that I won't have a booth there any more.

I'm still metabolizing the fact that I don't have to come home and leap back into production.  Yes, I'm running low on stuff.  That's the whole point!  I still have plenty of other stuff - like lots and lots and lots of tea towels.

I plan to make more, partly because I have yarn stash to use up.  So I'm hoping that tea towels will sell well in Calgary.  The place mats are nearly gone.  Almost not worth putting them out for sale, but I will.  Because they won't sell in my basement...

There are still piles of scarves, although they are shorter in height.  My next test warp on the Megado will be for four shawls.  I need to continue to scale up slowly on that loom so that we can become good friends.

It rained today, but it didn't snow and the ground wasn't covered in ice - so that was a 'win'.  But snow is in the air and the drive through the Rockies may not be as pleasant as we'd like.  OTOH, it could be lovely.

No way to know until the time comes.

Two down.  One to go.  Then the guild sale, where there may be things on deep discount, just to move them out of my basement and free up space for whatever new stuff I make in my 'retirement'.