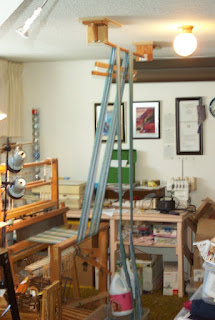 Someone commented that she didn't have room for a valet.  One of the reasons I like the valet is because I have very little room.  The only room I need to dress the loom with the valet is the space the bench takes up (I move it to the side of the loom) and the walkway behind the bench.  Because, folks, that's all the room I have!  :)

This warp is 11 meters long.  From the time I had the jugs weighting the warp until I cut the loops at the front of the loom, the beaming took 16 minutes.

I luv my warping valet!
Posted by Laura Fry at 3:30 PM

If you read the original book on a warping valet it is an incredibly complicated and bulky proposition. My warping valet is just some big huge hooks (like cup hooks, kind of, but the size of a large bolt) screwed into the ceiling and then some S-hooks to hold a piece of chain to that big bolt. Then another hook on the end of the chain and a hang bar from a closet (like a big huge dowel) carved so it wedges into the great big S-hook. I guess it's simpler in reality than in description. But it takes up exactly zero space in my weaving room because it's up by the ceiling.

I'm fortunate that I have a low ceiling, but a higher ceiling would just mean longer brackets (or chains). I haven't looked recently at the trapeze mounted to the loom in Kati's book and my copy is on loan. I think it might depend on what type of loom you have....

ps - looking forward to seeing you next month. :)

Inquiring minds want to know... How do you get your warp over the trapeze. Mone is on a pulley system so I lower it do the level of the loom then pulley it up to the ceiling.

I love your system!

What is the best reference for installing a valet?

The rod comes out of the bracket, Ellen, so it's easy to lift the rod out, put it under the warp chain(s) and then insert the rod back into the brackets. Like I say - low ceiling. :)

Best resource is probably Katie Meek's book, Dance with Your Loom. She calls what I have a 'high bar' I think.

Thanks to reading several of your posts on warping valets, I ordered one, along with angel wings, from Bruce, of Purrington Looms. I'm "patiently" waiting for their arrival......

Laura, I too use a warping valet and love love love it. After reading Katie's book I made the valet exactly like her directions. Of course being a weaver and always do things my own way - over the course of time I have modified the valet down to 3 parts, legs and cross bar. Works like a champ and doesn't take up any room.

A valet is a very simple contraption. :) The set up is basically just taking the place of an extra pair of hands and holding consistent tension on the warp.