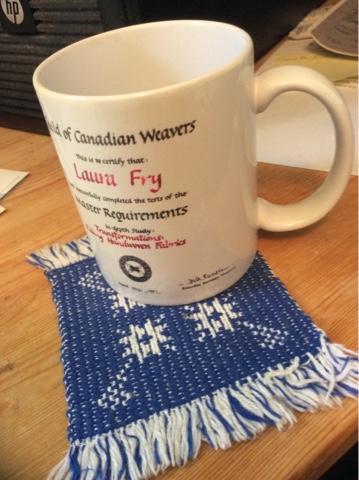 Like most women of my age, I was raised to question my own worth.  It wasn't just my parents that instilled this in me - it was part of how society was in the 1950's.  Women had been encouraged to enter the work force during the war, then were pushed back into the home and proper 'women's work' when it was over - where we didn't get paid, our time wasn't valued the same way a man's was and we were expected to do things like 'share' and work for free as volunteers.

During the 1970's that began to change (thanks Betty Friedan, and others), but that sort of attitude has deep roots.

For the longest time I felt very...awkward...about people referring to me as a 'master' weaver - in spite of having the paper to show for it.  (Thanks to my supportive spouse for getting this mug made, to remind me that I did, indeed, fulfill the requirements for the Master Weaver Certificate - as granted by the Guild of Canadian Weavers.)

Even today, women typically make 70% of what a man in the same position will make.

So, appropriately enough, this Labour Day weekend a furor of sorts has broken out, centered on what is a fair wage for fibre arts instructors.  This group is largely filled by women - with a few men.

The target audience is typically women - with a few men.

Over the years I have struggled to set myself a fee that I felt would be 'fair' - not just for myself, but for those hiring me.  Knowing that the audience for my classes is about 99% female, and the reality of the economics of women, I have kept my fee as low as possible.  Also I have factored in the fact that my travel costs to anywhere are going to be much higher than other people.

Add into that the fact that I have not reviewed or adjusted my fee for three years, and my daily rate is woefully out of date.

I am also reaching an age where the stress of travel - time zone changes can be as much as four hours from the west to the east - the general stress of wondering what Mother Nature will throw in my path, airlines that arrive late so I miss my connecting flight(s), sleeping in strange beds, food that may - or may not - be 'safe' for me to eat - or else I don't eat as much as I need meaning I may be teaching on a near empty stomach, trying to explain things in as many different ways as required to reach the majority of the students.

There is also the aspect that someone like myself who - and it is difficult for me to say this - has an international reputation - is under pricing herself, potentially making other teachers who *are* charging a more realistic daily fee look 'bad'.

After thinking about all of the aspects of being an itinerant teacher the choice is obvious - I either quit - or I increase my fee to something that more realistically reflects what others of my stature are charging (and I can't tell you how hard it is for me to accept that I AM a 'name' - I need to keep that mug out and use it daily to make myself believe I am what it says I am!  A friend gave me a tiara - perhaps I need to wear it around the house to remind myself I am...special???)

And thus I make this announcement.  For those guilds who have contacted me for prices, I will honour the quote I have given.  Beginning today, my teaching fee is now $600 per day, plus travel costs, plus food and lodging.  Workshops will also have an attached material fee, depending on what is supplied.  The hosting guild will provide the handouts - because carrying handouts in my luggage means an over weight bag, which is already full of teaching samples (and textiles for sale during the event.)  This fee is still on the low end.  I am keeping it on the lower end because I recognize that my travel costs will be higher than pretty much any other teacher out there - unless they come from abroad.

Email ThisBlogThis!Share to TwitterShare to FacebookShare to Pinterest
Labels: teaching

Good on, Laura! It's time to acknowledge our worth as women, and your special worth as a great teacher. My business mentor said, "Never be the cheapest in town; be the most expensive. If someone asks for justification for your prices, reply that you're worth it."

You ARE an International icon, Laura. I personally have learned so much from your You Tube videos, your blog, the Wet Finishing class that I got from one of the online sources, facebook comments, etc. I long to one day be able to put on a warp as effortlessly and smoothly as you do! I LOVE to wet finish each and every project, using your tips and tricks, in order to see the transformation into real "cloth". Your influence and teachings touch all of my weaving efforts in one way or another. While your humility is to be admired, just realize how important what you do in the way of instruction is to those of us who are rather new at this craft! When I grow up (in my weaving experiences), I want to be able to "do" as easily as Laura does!

You ARE an international phenomenon and you should be charging even more than what you're raising your rates to (adjusting for the Canadian dollar's low level right now, that is $467 in USD). I am curious about the differences between weaving teachers (of which I am one) and knitting/spinning/quilting teachers (or other fiber teachers) make. I think quilters do the best. And I think weavers probably charge the least. I won't get into the reasons I think this is true of weavers right here, but I will say BRAVO! (And keep raising your prices--it helps the rest of us tremendously.)

When I started teaching about 5 years ago, I asked a well-respected and internationally recognized mentor/colleague what she charged for teaching. The answer was $125/day (because she didn't "need" the money. I almost fainted. I believe she has raised that rate significantly now.) But I want to thank you for acknowledging that when teachers of high stature don't charge what they are worth, it really hurts those of us who are coming up behind them in the ranks. Fortunately I found another mentor who keeps telling me to raise my rates. So recently I did what you just did and raised my rates significantly. I will honor the guild workshops I have contracted already, but all new contracts will get a significantly higher rate. This of course requires the guilds to actually charge their students more. This does not seem unreasonable to me. When a guild can offer a 3-day class for $150 but can't pay my hotel or even for my parking at the airport at home, there is a problem.

Wow. Sorry Laura. I mostly just wanted to say BRAVO! You've inspired me yet again.
From a fellow weaving teacher who admires you and everything you do. Keep using that mug!

Rebecca - most of my teaching is done in the US, so that is $600 US. :) And I took *my* inspiration from Abby Franquemont who was brave enough to raise the issue - appropriately enough on Labour Day weekend.

Thanks Laura! Your post inspired me (I apologize for going on so in the comments). I also was inspired by Abby's frank assessment of her costs and why she charges what she does. $600/day is a good rate for a weaving teacher in the US... If our expenses are also paid! This is the amount I have on my latest contract though I like Abby's way of charging by the hour. Some guilds want me to teach 6 hours, some 9 (if you include the lunch time where they "provide food" (that I can't eat) and expect me to entertain questions. *grin*)

I am a weaver, not a weaving teacher, but I am a volunteer with a large guild that contracts with weaving teachers. Would your fee be a stretch for us? Yes. Does that mean that I think it's too high? No. You are a weaving gem, and are worth every penny. I've never had the chance to take a class with you, but I have learned SO MUCH from your blog and videos. You are a generous woman, weaver, and human being.