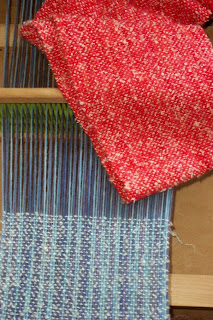 One of the blogs I follow is Janet D's:

Scarf A Day: Everything Old is New Again [Scarf #42]

She essentially challenged her readers to join her in her Scarf A Day goals. So today became a Scarf Day for me, too. :)

I had managed to weave one scarf on the little Ashford rigid heddle loom a few weeks ago, but the loom had been languishing. Today was crafts drop-in day, so I grabbed some wool that I'd balled up a while ago, quickly wound a warp then headed for the drop-in where I would have a nice big table all to myself to dress the loom.

Since it took hardly any time to dress the rigid heddle loom, I started weaving, and managed to finish the scarf just before 4 pm.

Still have to weave the header (footer?) before I can cut it off, but I didn't have any 'extra' yarn with me for that. So it had to come home still on the loom.

All of which is to say that no, I didn't finish re-packaging the spinning fibre, nor take the photos for my website. :(

It has been a bit of a challenging couple of days on the personal front and it was nice to just get away from the mess and chaos here and spend a little time with some other creative people.
Posted by Laura Fry at 4:19 PM