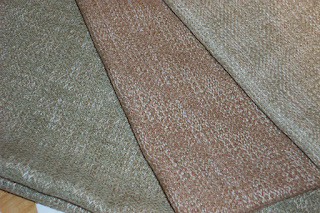 Got some pressing done today and as it's a fairly mindless task pressing is, my mind tends to wander.  With the Big Project sort of dominating my thought processes I was worrying away at the logistics of getting everything done - text written, diagrams to include, samples to be woven and so on.  And of course the assembling of the sample pages and text pages.

For Magic I had my brother's basement rec room.  I don't have that option for this project.  Nor will I have my mom's basement as we are hoping hard that her house will sell quickly.

One option is to re-organize the annex and set up an assembly station there.  Which means that I'm going to have to hang on to the annex for a while longer - first to press the samples (so much easier to do on the big press, even though all of the samples for Magic were done on the small flat bed press), and then to assemble the pages.

As I was thinking about all of those things, including the samples I want to include, it suddenly occurred to me that the current warp on the AVL pefectly fits the parameters of one of the samples I want to do.  Even better, there is just about exactly enough warp left to actually weave that sample!  And I had been fretting about not having gotten more of this warp woven by now.  :}

So tomorrow, instead of carrying on with the towels I had planned - I can always make more towels later, right? - I will redesign the treadling to weave the samples and begin weaving those.

Wow!  Progress on the Big Project before December!  Maybe I can make the May deadline for the Alberta conference after all????

I'm glad to hear that Puff is still alive and kicking!
... and remember my Monster Mangle - even with the mail time maybe it will help?
(The storm has passed, and the power is back, only 8 hrs this time!)