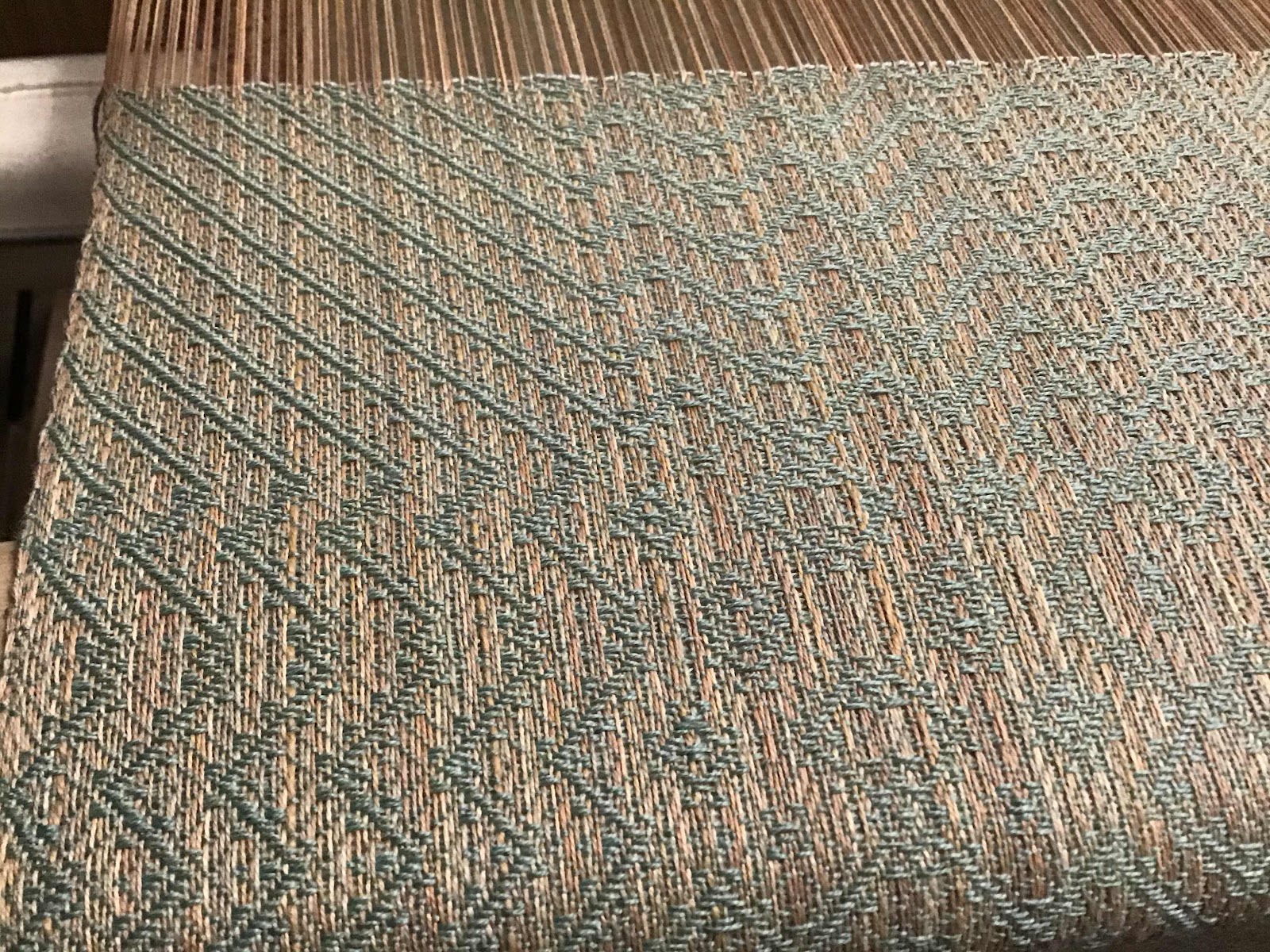 Finished the copper-y brown weft and started on the green cotton.  The cottolin I'd intended to use turned out to be 2/8, not 2/16, and therefore too thick.  However I have a fairly deep and broad stash of 2/16 cotton, and so the rest of this warp will be woven off in cotton.

Based on previous warps, I was pretty sure that the green would marry nicely with the variety of beiges and slightly peach yarns in the warp, so much so that I just started right in.  Gotta tell ya, the first 1/4 of an inch?  Big doubts.  Still doubts at 1/2", but by the time I got to 1"?  The pattern was beginning to resolve and I could see it was going to be just fine.

Sometimes you've just got to have a little faith.

The cotton was just slightly thicker than the linen, but more flexible, so I thought it would beat in about the same - slightly more ppi than epi.  But no, instead of the less than 45 degree twill angle of the linen, the cotton is almost perfect.  Which meant that the towel was a wee bit long, given I'd only changed the tie up, not the actual treadling.

So after the first towel, I removed about an inch from each end, and the first towel will be cut shorter to match the rest.  Too long is easily fixed. 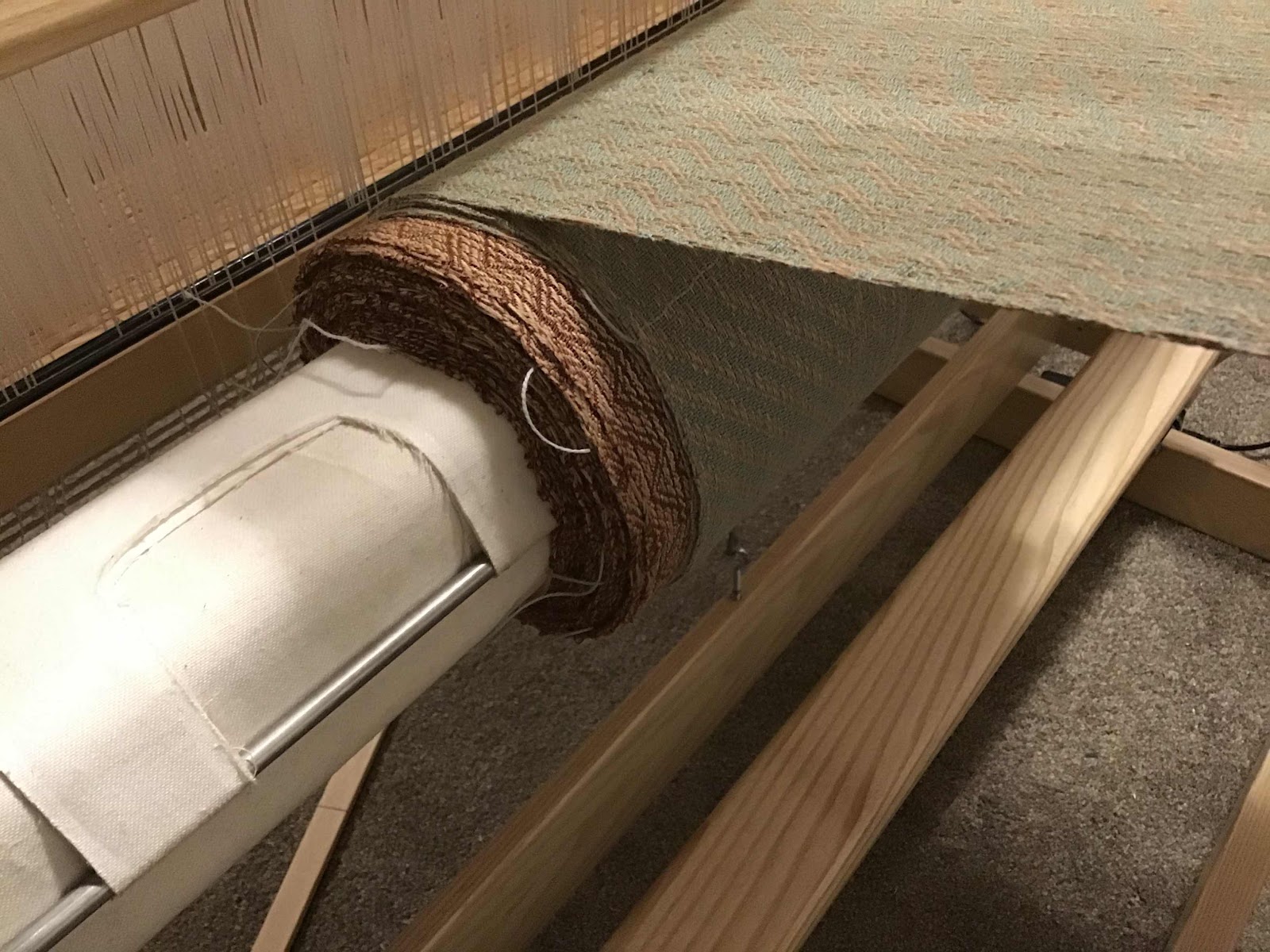 I lost count of how many of the brown towels I wove.  It really wasn't important - I was only just trying to finish off the brown linen and how many towels wasn't any kind of consideration.  But I think there might be 12.

When changing from one type of fibre to another, it's always a good idea to begin with the fibre that will draw in the least.  When I changed to the cotton, which is a lot more flexible than the linen, which means it will draw in more, it was clear that it was a very good idea to weave all the linen first.

The change in draw in is about 3/4" on each selvedge.

If I'd done the yarns the other way around, I would have to add sticks to the cloth roll to keep the two different yarns behaving nicely.  If you find yourself in a position where a change in weft means less draw in, just remember to add sticks to support the entire width of the cloth as it reaches the cloth beam and you should be fine.  If you don't the part that extends beyond the cloth below it will 'collapse' and selvedges will become very dodgy.

You can just see the different colour I've woven in to be a cut line to make cutting the towels apart easier.  I program an empty lag to let me know when to add the cut line.  When I step on the treadle and there is an empty lag, it's pretty obvious there is something happening!

I suspect I have a threading error in the last few inches of the warp, but even the camera isn't showing me a problem, so I am going to turn a blind eye and stop fussing about it.  The gaps you see in the cloth are due to reed marks, not threading issues.  (I've checked.  Multiple times.)  So all I can conclude is that my math was off.  Yes, there are five thread floats.  I wove twill blocks and reversed the direction of the twill.  So those aren't mistakes either.

With only a few yards left of this warp, I cannot fuss about it any more.

"Forget your perfect offering.  There is a crack in everything.  That's how the lights gets in."  Leonard Cohen.

I'm going to channel my Leonard Cohen and let whatever light in that can get in.  They are tea towels.  If there is an error, they will still dry dishes just fine.
Posted by Laura Fry at 10:43 PM