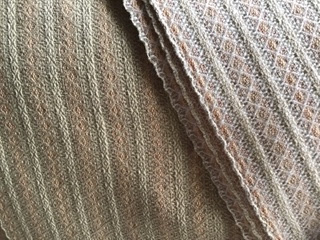 Today is a grey day and it was hard to get a photo of these two towels to show the subtle difference the change in weft colour is making.

In real life, the beige is a bit darker, dull in appearance.  The white isn't quite this bright but still seems livelier, cleaner.  To my eye.  Which may be becoming suspect depending on how quickly the cataracts are developing.  It's one reason why I'm trying to get this series done, this yarn used up.

And I have been thinking a lot about 'boredom' and 'fatigue'.

In my life I have experienced very little 'boredom' - at least since I left childhood behind - but a lot of fatigue.

It was one reason I latched onto weaving in the first place - I could see the scope for constant learning, constant studying, constant experimenting.  Constantly being surprised - sometimes in a good way, sometimes...not.

This warp has provided some of those surprises.  The sleying error that turned the first towel into a piece of cloth that may wind up as dish rags.  Oops.  Still not perfect!

The biggest (good) surprise was how much I liked the white as weft.  Which was a good thing because I had quite a few nearly empty tubes I wanted to use up and I'm going to use up a lot of them.

There might be enough white for four more towels leaving a bit of warp left for maybe using up some more beige.  Just a different shade of beige than the one used first.  There are two I'd like to use up - one is more brown, the other more peach.  I doubt I'll use up both, but it would be nice to use up some.

People shake their heads at me, wondering if I don't get bored with my 20 yard long warps.  The honest answer is no.  There is very little boredom in my life.  Boredom is when you think of something you'd rather be doing.  If you'd rather be doing something else then perhaps what you are doing doesn't need to be done.  Or it might be changed in some way.  Sometimes people cope with a long warp by changing the tie up after every item.  Or they change the weft colour.  Or both.

And as for the selvedge on these towels not being ruler straight?  They were on the loom.  But during wet finishing, physics took over and the tiny scallops developed due to the threads shifting and moving to areas of least resistance.  The more resistance at the selvedge, the less the threads drew in.

Do I consider the selvedges on these towels to be imperfect?  No, I don't.  It is the threads doing what they will do once off tension and relaxed during wet finishing.  They are consistent.  And that's good enough for me.

I'm not bored yet with this series of warps, but perhaps I'm ready to move onto something else soon.  However my desire to use up as much of the 2/16 cotton keeps over riding my interest in anything else as I pull yet one more combination of colours off the shelves and put it into the queue to be woven.

Right now I have two combos waiting in the wings, with a possibility of one more.  We'll see.

Laura--I am constantly amazed at how your blog speaks to me. The idea of boredom is something I seldom experience as I make conscious decisions about how I spend my time. For me, that is the key. Also, I live alone on forested property, so there always is something that needs doing. But that is what makes life every day something new.

For me, I enjoy weaving as a physical or working meditation. :)

Allen Fannin used to say that he liked boring. If weaving was 'boring' that meant nothing was going wrong. I like it when nothing is going wrong and I can immerse myself in the physical act of weaving, enjoy the rhythm, the dance with the loom as my partner. :)