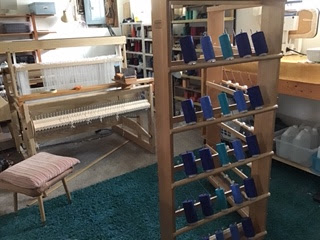 set up for the next warp
Yesterday I managed to finish weaving the beige warp but it was late in the day when I did so I left it at that point.

This morning I cut the warp off the cloth beam, cut/serged the towels and got them into the washing machine.

Then I set about getting the next warp ready to beam.

I have a lot of this dark blue left, so I'm thinking that the next warp will have the aqua replaced with rose and then I'll do another with that combination.

Beaming two 20 yard (ish) long warps won't use up a lot of the blue, but I can also use it for weft, once I run out of the dark navy blue on this warp.  It will most likely weave up most of the warp, but not all of it.  There are three tubes half, or more than half full.  So, a lot of weaving can be done with that much yarn.

I didn't count how many nearly empty tubes I emptied on the last warp but it had to be close to 20, so I feel a great deal of satisfaction with that progress.  This warp won't produce that level of empty tubes - there is just too much of these colours left, but using up some is better than having it sit on the shelves.

Once I've done the two blue warps, I have a pale grey/blue warp ready to go.  And then?  Then I think it will be time to stop with the tea towels and try to use up some of my other yarn.

With each tea towel warp taking about two weeks (or a bit more) to weave off, these three warps will take me into December, especially with the guild sale coming up.  So my goal is to have the tea towels done by the end of the year (I *might* be able to pull one more warp once these are done - will see) and start the new year with a new category of textile.

Talked to Doug this morning and I think it's time to do some scarves again, this time trying to use up some of the rayon I have in quantity.

I keep looking at the silk, not entirely sure I want to tackle it - yet.  But the fact that I keep coming back to the shelves to look at it means I'm not ignoring it, just letting it simmer on the back burner.

Time to go transfer the towels to the dryer and begin beaming this blue warp.