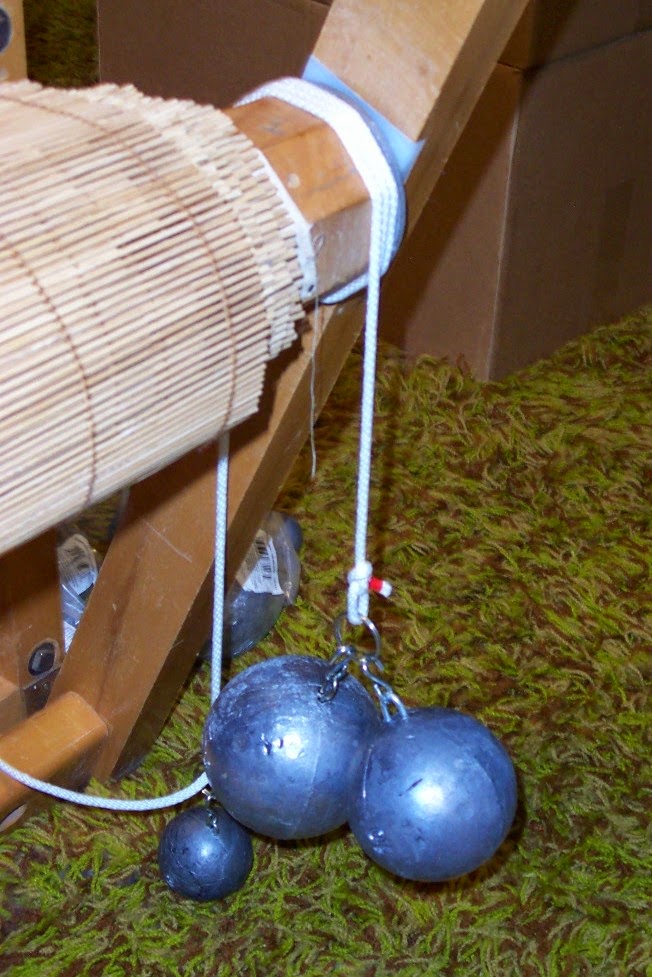 I think I posted this photo once already but it pretty much shows everything that needs to be seen.

The live weight tension system is simplicity itself.

One long cord, long enough to wrap around the beam three times which will support the weight of whatever you use to provide the tension (via the weight used) plus a small counter weight on the other end of the cord.

My loom is just 36" weaving width and I rarely dress this loom full width so providing tension on just one end is fine.  A wider loom might require the weight at either end to make sure it stays put.

Kati Meek has published a monograph on this tool and the warping trapeze (as she calls it - same idea as my warping valet) so do buy her book to get the details.

The original brake has not been removed from the loom because when I'm beaming a warp, I need that brake to keep the warp rolling on with good tension.  Once the warp is dressed, the cord gets wrapped around the beam, the weight applied (in this instance 25 pounds at the heavy end, 2 pounds - I think - it might only be 1 pound as I was tweaking the system over the weekend), lock the loom's brake system in the 'off' position and away you go.

At the moment I'm weaving scarves which don't require a whole lot of weight.  If my warp was wider or required higher tension such as place mats, I would add more weight to the cord.  Up to 40 pounds, according to Kati.  The counter weight needs to be sufficient only to prevent the heavy end from sliding down - gravity, you know?

The AVL has a type of live weight system so I'm used to the warp beam 'rocking' as I open the shed, but if you've never experienced that, you might find it a bit off putting at first.  This is normal!  It's not unlike the Louet beam that rocks - a little disconcerting the first time I wove on one, but you do get used to it when you realize it's not a bad thing.  Quite the opposite in fact.  There is less stress on the warp yarns when the system has a little 'give' in it.

The big thing is that I no longer have to reach out to the right with my foot and depress the brake release.  With the beginnings of arthritis in my right hip, I needed to reduce the stress on that joint.  And once the tension is set, all you have to do is just crank the fell line forward - the tension will stay the same from one end to the other - unless the cord gives way or something.    But as soon as you put the weights back onto the cord, you're back to where you were.  Automagically, as it were.

Fascinating. Don't understand it, but will most definitely try it. Did I say this is fascinating? :->

Thanks so much for introducing me to this system. I am just loving it. I often weave about 32" wide fabric, so do use a bar (broomstick) to hold the weights.

Two huge benefits from my perspective: first-EXACTLY the same tension along the entire length of the fabric, second-quicker & easier to advance the warp.

I encourage everyone to buy the book & give it a shot!

Peg, the one 'down' side is that the cable creeps toward the centre of the beam eventually fouling the apron rod - are you finding this with the double cable set up?

I initially had a bit of trouble with this on one side of the loom only. Then I realized that I needed to make sure that the rope that went down to my broomstick (holding the weights) had to be perfectly straight (it hadn't been). I've only fixed that problem recently---not enough yards woven yet to know if it's totally resolved the problem.