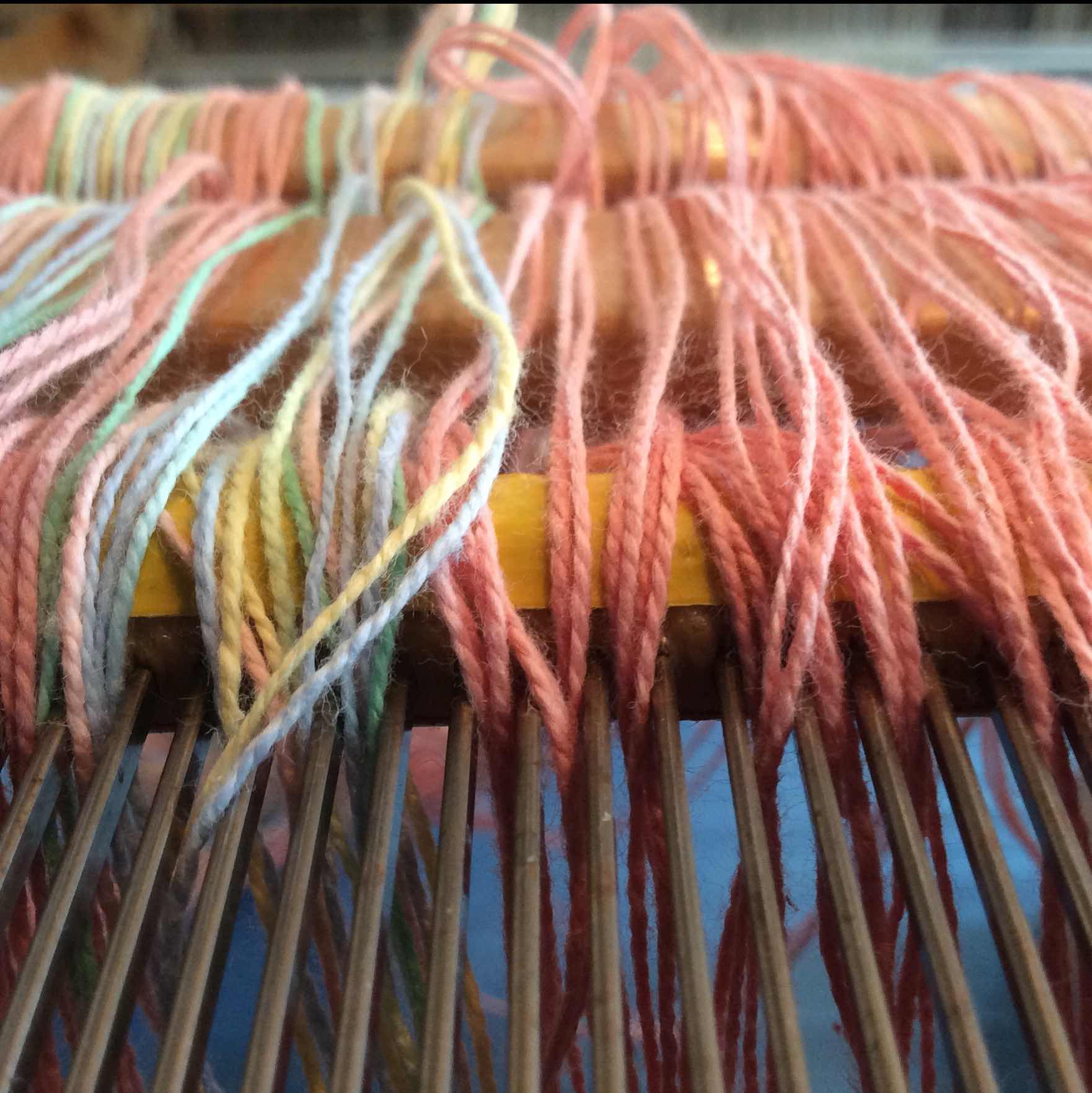 When some people find out my preference for spreading the warp to it's weaving width is rough sleying there can be a variety of reactions.

The answers to those questions take longer to explain than a short answer, which is, this is the method I have tweaked to fit my needs and it works best for me.

How I got to that conclusion takes much more detail.

The warp above is an example of how spreading the warp using a reed is most definitely rough.

I'm aiming for 24 epi, but I have - mostly - wound two ends at a time.,  Except for where I haven't.  This means that in order to rough sley there is a bit of mixing and matching going on.

I don't have a six dent reed wide enough, which would be the easiest size reed to use.  I have two six dent reeds - one of which is too narrow, the other which is way too wide.  So I tried a 12 dent reed, which is also 'long' and the spaces are narrow.

Now this is not my preference, but for this textile having the warp beamed narrow is not going to cause any particular issues as it has enough elasticity to take the deflection from narrow to wide to narrow (as it draws in during the weaving).

When I demonstrate this technique people get very concerned about how 'messy' the threads can look.  So long as I have tied a good tight choke tie, any disruption in the threads isn't going to matter much as long as I don't yank on the ends and pull slack up out of the length of the chain.

So why don't I just use a raddle?  Well, when I started winding and beaming warps on the Fanny I did borrow a raddle.  But I found that filling the raddle really wasn't much of a time saver - the objection some have to rough sleying a reed - that it will take longer than filling a raddle.  The real reason I gave up on a raddle though was that the sections were too large for the usual yarns that I use.  I wanted a finer separation of the yarns so there would be less tendency for them to wrap around each other.

In the end, after trying both - and I tried the raddle several times - I find this method more efficient even though I may take a little bit more time at this stage which will save me a lot more time at the beaming stage.  Of course my default length is 11 meters.

Or at least...this has been my experience.

But there are many ways to accomplish all of the stages of weaving - from winding the warp in the first place, spreading the warp for weaving, beaming, threading (or the other way round if you prefer front to back), tying on.

As they say...Your Mileage May Vary.

Currently reading The Nothing That Is; a natural history of Zero by Robert Kaplan
Posted by Laura Fry at 11:56 AM

very interesting! I know it has been a while, but can I ask you - if you warp back to front, once you've used the reed for spreading the warp, do you leave it in place for the weaving? And if so, how do you attach it to the loom?
Thank you!

Once the warp is beamed the reed is removed so it can be threaded. I frequently use a coarser reed for rough sleying than I do for weaving.

How do you maintain the cross? I've got to get my cross behind the heddles the first shaft opens easily, but I can seem to figure how to open the other sharf while still in the reed and I don't want to lose my cross. Help!!!!

I have three lease sticks. Two hold the cross and I use the third stick to transfer the cross from one side of the reed to the other. I might have a You Tube of that - let me check.

Try this one. Not video but a series of photos showing the process through to transferring the cross after beaming, prior to threading.