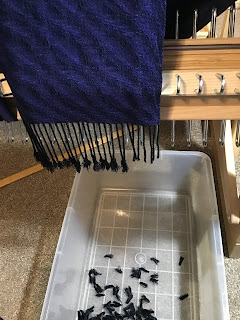 As the final touch on most of my scarves, I like to trim the little fuzzy bits off the ends of the fringe.  During wet finishing, some yarns tend to 'melt' and get quite untidy looking.  I've tried various places in the studio to do this job and it's just one of those tiring and exasperating things that I find necessary but difficult.

However, today I tried something a little different.  With the new loom and more space in the studio to move around (usually) it occurred to me that I could place the scarves draped over the back beam of the Megado and sit on the small stool I use when I'm beaming warps onto the loom.  The added advantage was that my supplemental lighting was already in place for beaming so I could illuminate my work area and I could sit quite comfortably while I did the task.

My plastic bins fit nicely under the beam and caught all the fuzzy bits as they were clipped off and it didn't take long before all six scarves were done.  Now that I've worked this out, I think that last final touch will be a lot easier to do and I won't procrastinate so much about doing it.

At any rate, I'm quite pleased with how these scarves are turning out.  The different rayon yarns are giving a range of different weights and touch.  I've managed to clear several cones of enough yarn that there is too little to weave with, so those have been put into my knitting stash.

But I also have quite a large inventory of scarves, so I've been thinking about the dribs and drabs of 2/16 coloured cotton.  I've just now ordered 16 pounds of natural white and that should be more than enough to use up the fine linen I was gifted, plus the 2/16 coloured cottons.  I have a LOT of a mid-range turquoise and may grow tired of seeing that colour long before I use it up, but at least I can make a dent in it.

The goal is to continue to use up as much as I can and I'm very near clearing those shelves off.  It will feel like progress when I do!

I'm still thinking about the 2/20 mercerized cotton.  There isn't really enough to do a mix of colours so I may be playing with small stripes again.  But first I want to see some real progress on cleaning some of my shelves off.

Little by little.  Progress, even a tiny amount, is still progress.  Winding up with some nice scarves is kind of the cherry on the top.  My goal at this point is to bring some into the guild sale next Saturday.  So I'm going to try and finish the current warp (three more scarves to weave), get them all fringe twisted and wet finished.  I'll have to stay focused.

I use a rotary cutter, acrylic ruler and gridded mat (made for quilting) - very fast and accurate. Easy clean up. Although at this point in semi retirement you probably don't want more tools.
Stephanie S.

We all have to find tools and processes that work for us. :)