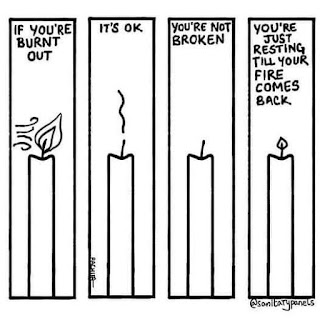 I had plans for today.  Big plans.  Progressive plans (as in I was going to make some progress).

Well, I made *some* progress.

6 scarves were put through the washer and dryer.  The next warp got set up and beamed.  And then I headed to my hair dresser to get shorn.  I'm doing a Zoom next week and really wanted to be less shaggy for that.

Then I had a few errands to run, one of which was to set up an appointment with my doctor next week so I could talk about a health issue.  And then I came home and kind of crashed.  I've been sitting since then, not doing anything productive at all.

Instead of going to the studio I was scrolling through Twitter and reading up on a few events that were happening today (political) and looking for word on the conditions to the south.  Because I may have to go down there sometime soon to see a specialist.  No news would appear to be 'good' news?  Hopefully they weathered the storm (quite literally) and can now focus on cleaning up afterwards.

But now it's after 3 pm and still I sit.  However, I do want to get those scarves pressed so I'm about to head down to the studio again and at least get that much done.

I can start threading tomorrow.

The next warp is a bit of a departure for me.  It's about 1/3 rust, and 2/3s green with a bit of black to make up 30 spools.  I've beamed 12 sections and will sley to 32 epi.  The threading is another fairly simple 16 shaft progression with lots of points in it and it should work quite nicely with a variety of tie ups and treadlings.  And again, using up stash is the goal.

But first, I need to get those scarves press so that I can deliver them to the guild sale on Saturday.

How odd. I posted a comment on this post yesterday. Twice. From my iphone, which I've used plenty of times before, and they both disappeared. So today I'm trying it from my laptop. I'm sure I don't remember exactly what I said yesterday, but the gist will be the same.

Rest is important. Listening to our bodies is important. Don't feel the slightest bit guilty about 'doing nothing' (I'm sure that brain of yours was working); instead, revel in the fact that as we gain the years we also learn some things about paying attention to all the many things our bodies and our brains need, including rest. You did the right (no)thing.