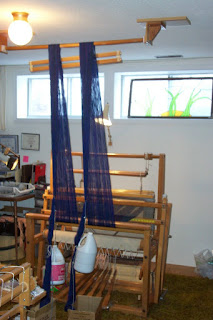 There is a perception that in order to use a warping valet/trapeze you have to have a lot of room.  I use one in large part because I have very little room.

The other loom doesn't have a ceiling rod to use, so Doug made a 'trapeze' for me out of two 2.x4s and a closet dowel.  That loom has at most three feet between the breast beam and the wall in front of it.

One of the things many people have difficulty with is getting their warps beamed 'well'.  There are many different approaches to getting this part of the process done.  Over the years I have found that beaming with tension is a key component of getting warps that behave.

One recommendation for beaming is to stretch the warp out for as far as you can, then put weight onto the warp chain and drag it along the floor.

When you have only three feet in front of the loom, the sections you can beam are very short.

Weighting the warp as it hangs off the breast beam means even shorter sections.

By routing the warp chain up and over a valet or trapeze, longer sections of warp can be groomed and then beamed.  This makes for a better job (as far as I'm concerned) and it also makes the whole process more efficient.

I have had so many people contact me to say using such a device - either ceiling mounted or the 2x4/closet dowel - have made weaving much more enjoyable as it no longer is a chore of hours.

Here is a video I did of me beaming a 9 meter long place mat warp.  Notice the clock.  This clip was done all in one go and was not edited in any way.

I am one of those who now always warp with my ceiling valet, thanks to you. It’s been more than 5 years, including a move to a new home and studio that required ceiling modifications (really just big hooks screwed into existing ceiling beams) to accommodate my valet, which hangs from chains so it is both height adjustable and can be easily moved from one loom to the other, since the looms themselves are pretty stationary. The “Laura-ism” “a thread under tension is a thread under control” is both true and worth consistent repetition. :-)

I hear from people frequently enough that things have improved for them after they really look at what they are doing and change their approach - and get 'better' results - that I keep banging on. :)