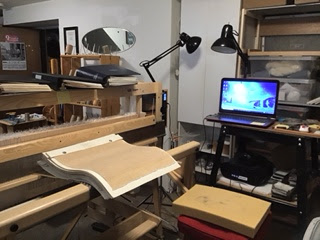 Yesterday I managed two towels, did a bit of marking, then started getting set up for the Zoom this morning.

I am limited in where I can set up and have settled on this little 'corner' in front of the Megado.  It's not ideal.  There is a window behind my head that wipes out the lighting and leaves me sitting in shadow, so I've been blocking the window.  Which sort of works.  Enough to be going on with.

If it is a very bright sunny day, I have to also block the other window in the space, or again, I'm sitting in shadow.

There is little room to put any of my teaching resources.  I have a small tv tray to my right that I can put some things on, but it's too small for today's samples.  So I carefully chose which ones I would use and decided on just one run of samples for a set of six, which are on the front of the loom.  The warp is holding them there.

But I have some binders of samples, too, so they got put on the top of the castle.

I have no idea if this will work well enough, but it's what I have.

Because I'm sitting in front of the loom, I sit on my weaving stool.  I've tried other arrangements, but with the laptop high, I also need to be sitting high.  I need to be able to see the keyboard for one thing.

Today's presentation is about how vast the variables are in the creation of cloth.  I'll be sharing some of my experiments and discussing why I did them, as well as how.

This morning I did not wake up with a nasty sinus headache, but I'm going to 'medicate' anyway, just in case anything starts in the middle of the presentation.  I can't call in sick (well, I could, but...)

The thing with being self-employed is that there isn't anyone else to call.  You're it.  I've gotten used to teaching while unwell, it's nothing new.  But at least teaching this way there is no dark o'clock flight to scramble to catch, no scrambles through huge airports to catch the next flight, no suspect food or people who don't realize their shampoo has a very heavy scent.

Email ThisBlogThis!Share to TwitterShare to FacebookShare to Pinterest
Labels: Zoom