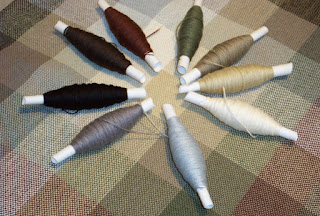 One of the things I had to do as a budding production weaver was learn how to estimate time required and plan out the best course in terms of actual production.

I learned how to work in batches.  How to set up my studio as best I could given the space constraints.  Plan ahead so that I could order in yarn so that it would arrive when I needed it.

When it came to planning workshops, I had to think about what the workshop was meant to teach, then figure out appropriate warps, develop class handouts, and the timing so that everything that needed to be done would get done.  That meant estimating how much time *other* people would need to do the weaving.

Eventually, after talking with other instructors, I developed an approach that mostly worked.  I would have 12 'basic' warps, and if there were more than 12 participants I would start doubling up the slower weaving warps.  Then when class started, I would tell the participants that were were 'only' 12 warps and that they did not need to weave on all 20 of the looms in the room.  The looms then got labelled with the number of the warp with the duplicates clearly identified.

This seemed to work well.  Being clear about my expectations of what people would accomplish took a lot of pressure off of most people.  It didn't always work, depending on how may type A personalities there were, and how competitive they were.

As I put together my Zoom lectures I have to keep in mind that a two hour presentation of really in depth information is pushing listeners to their limit of being able to absorb what is being shown.  However, there is the recording for them to go back to and review, so again, it seems to be working.

Now I'm working on another format and having to once again think through the length of the presentation, what I want to convey, how best to do that given the format.

I am further working with a much reduced level of energy and a lack of adrenaline (in comparison to what I used to draw upon) to sustain me for several days.  But I'm pretty committed to being able to teach the stuff I think is critical for people to know.  Call it my 'legacy', if you will, but somehow people need to understand the principles of the craft.  At least some of them.  At least enough so that the information is not lost to time, needing to be learned over and over again going forward.

Perhaps it is my ego at work here, but I'm going to give it my best shot and if it means I need a couple of weeks to recover afterwards, well, I AM supposed to be retired, after all?

You’ve enticed me, and I’m sure other readers as well, to look forward to you revealing more info about this next Big Project. 🤓