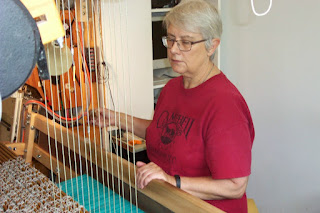 I don't like photos of myself.  Especially as I have aged - and expanded, shall we say.  It's hard for me to view photos but especially hard to see video of myself.

So most of my video clips on You Tube show very little of me and focus on my hands.

Doing the DVDs for Handwoven/Interweave (now Long Thread Media) were very difficult.  I was having health issues and quite frankly, felt like crap the entire time.  (Turned out I was having cardiac issues and hypoxia and less than a year later I'd be having triple by-pass surgery.  Which 'fixed' that problem, but other health issues linger.)

Offering to do Zoom lectures took a great deal of my mental energy and I really dislike seeing myself on screen, usually with the camera looking up my nose.  If I lift the laptop up higher I can't see the keyboard.  So I try to not think too much about camera angles and just get on with it.

Over the years I have tried to go with the technology.  Developed Workshops in a Box, producing CDs with information I deemed essential.  And watched the technology change so rapidly much of the effort became 'antiquated' very quickly.

So I went back to writing.  Books seem to have longevity other methods of communication lack.

I look at my library and see books written in the late 1800s, information from the 1700s re-interpreted for modern audiences, others written in the 1900s and now the 21st century.

As I age, I wonder what impact I will have made on the weaving community.  How I might have done things 'better'.  Reached more people.

Then chide myself for an over blown ego.

Yesterday I renewed my medications by phone - because covid.  Doctors are not seeing people unless there is something that needs to be seen in person.  For people like myself with chronic issues with nothing much changing, there is no need to go in person so I'm glad to be able to just phone in.

But we chatted a bit about changes and what I was doing personally to try and reduce the effects of my biggest issue.  He sounded tired and stressed, and I worry about the effect the pandemic is having, not just on me but health care workers and people with developing health issues they hesitate to go get checked because the health system is so over run right now.

We know about the bubonic plagues of the middle ages.  Reports of the disease ravaging entire countries, laying waste to entire villages, still exist.

I wonder how reports of this pandemic will be seen in the future.

As you can see, I think.  A lot.  Sometimes it's good thinking.  Sometimes, not so much.

So I return to the studio and work on my Next Big Project.  There will be more yarn arriving for more sampling.  In the end, will what I do actually matter?  Who knows.  I just feel like I have to keep on keeping on.  Keep trying.  Keep encouraging people to learn more.  Explore more.  Fail more.  And then learn from those failures so they can improve and grow.

There is nothing I can do about posterity.  All I can do is keep going.  The future will determine if what I do lives on.  Or not.