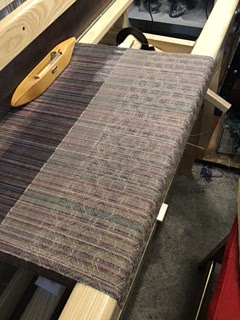 Started weaving on the current warp this morning and while I would not claim these towels are 'perfect' they actually turned out quite close to how I thought they might.

In the end, they are a bit darker than I expected, partly because the linen is more of a brown than the 'usual' beige of a good quality linen.   But this isn't 'best' quality, it is very much tow.  It is a bit slubby, quite a bit hairy, lots of chaff in it, feels coarse to the hand, and closer in colour to the dark grey cotton in the warp.

But in the end, I'm pleased with the results.  There is just enough difference in the colour of the linen to the rest of the warp that the weave structure shows up.  Having used this yarn previously I know it will break in nicely and make good all purpose towels as they are used.  Like a good wine, they will improve with age.

Also in the 'not perfect' file?  I made several errors while threading.  Somehow I missed two heddles entirely, and one point progression was the wrong way...I threaded /\ instead of V and those six threads had to be pulled out and threaded properly.

But once I got going the linen, which had been wound two days ago and put into a humidor, wove off quite well with just a couple of times having the weft wrap around the spindle of the shuttle and jerking to a stop.

The linen is a bit thinner overall than the cotton and the ppi is a bit higher.  The twill angle in the loom is somewhat lower than 45 degrees, maybe 42?  It's not enough to make much of a difference in the appearance of the design, though, plus that will shorten the length somewhat, which is fine, as well.  The cotton towels had turned out a bit on the long side for tea towels but since they were also thicker, hand towels can be longer.  These will be more 'proper' tea towels.  But!  They will also serve as hand towels.

The colours were threaded randomly, plus the four variegated yarns add some extra striping where the colours 'pool' in the warp.  As I weave, that pooling will happen fairly randomly.

But over all, I'm pleased enough.

I loved Uprooted! Spinning Silver, another standalone novel by Naomi Novik, is also excellent. The main character is Jewish, which is very uncommon in fantasy novels. It added to the story, as religion (and in this case resulting persecution) is rarely mentioned in fantasy.

Another author you might like to check out is Katherine Arden - her trilogy set in medieval Russia was wonderful - and as the trilogy is complete, you don't have to wait. Great to read in very hot weather, as it's almost always believably bitterly cold in the them!