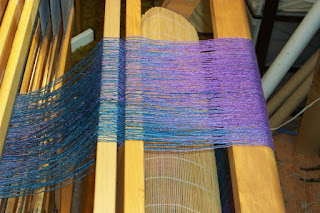 When is something an issue in weaving?

When you aren't getting the results you desire.

This morning I read through a thread on a weaving group where people were worrying about beaming issues.

Some of the things they were discussing would IMHO cause grief.  Others?  Might not be that big a deal.  They wouldn't really know until they were weaving.

But here is what I saw in the photos.

One warp that appeared to migrate from one side of the loom to the other.  The person was using a rough sleyed reed not a raddle and I suspect the reed was sliding sideways during the beaming.  Sometimes reeds are loose enough in the beater that they can slide in the grooves.  That could account for the warp shifting sideways and making a 'cigar' shape on the beam.

Insufficient warp packing.  Sticks with multiple layers between each layer of sticks so that the warp was beginning to take on a cigar shape.  With insufficient tension, the threads can roll sideways and upper layers cut down into lower layers.  OTOH, it wasn't so great that it might be a problem during weaving.

Some of the issues the weavers were discussing would absolutely cause a problem during weaving.  But others would be minor and probably not cause too many problems.

Since no one asked me for my opinion I didn't give it.  For one thing it would have required too much of my time and energy to try to address each and every issue being raised.  And goodness knows, I've already written thousands of words on just these issues on weaving groups, blog posts, and a book...

I'm not the only one.  Peggy Ostercamp has written a series of books addressing various technological problems, giving a variety of solutions - because frequently there isn't a one size fits all answer.  It's weaving after all - it depends!

Then of course there's the whole issue of changing something and having tried and true processes no longer work.  Change the width, the length, and things can go pear shaped.  What works on a narrow/short warp may no longer work when you scale up.

Change the yarn - from a highly elastic yarn to a non-elastic yarn and things can go 'wrong' very quickly.

Change the weave structure and/or the density and yup, things can become different and issues can arise.

People do the best they can.  They try to figure out the why, which is great.  But sometimes they come to a conclusion that doesn't really answer the question.

As always, if someone *wants* my opinion they can contact me.  My goal is to help people and encourage them to keep trying.  But weaving is complex and sometimes it's hard to know what is going wrong and how to fix things.