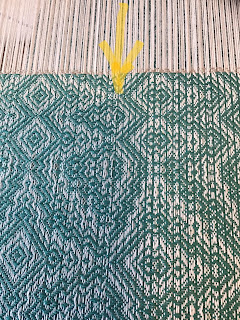 Yellow arrow shows where the mistake is 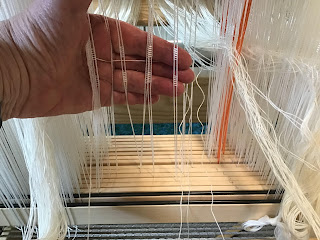 Pulling the thread out of the heddle from behind in order to thread into the proper heddle
Mastering a craft doesn't mean you don't make mistakes.
Mastering a craft is partly about recognizing when a mistake has been made, and knowing how to fix it.
Twill block motifs are good and all, but they do tend towards a sameness and I wanted a change so I messed around with a fancy twill for the current warp.
However, fancy twills are harder to thread than twill blocks and sure enough I had a brain cramp and made a mistake.
The easiest way to find a threading error is to weave the cloth and then look for the mistake.
The error I made was subtle enough that I wove the entire first towel and still couldn't see the mistake.  So I left the loom for a few hours, then came back to take a closer look.  Much like finding a typo.
In the end I had to do a side by side comparison of the shapes woven into the cloth to finally *see* the error, which was about 160 threads from the left selvedge.  I had a choice to make.  Weave the entire warp with that error, hoping it wouldn't be noticeable after wet finishing, or take the time to re-thread those 160 ends.
With 20 yards or so of warp, I decided fixing it was worthwhile.  Then to work out how best to accomplish that.
Rejecting the first idea, for a number of reasons, I figured out what I'd done - or not done - finding my place in the threading draft so I could see where I went wrong in the sequence, then tied in the 'missing' 8 heddles.  Then, one by one, I moved the threads out of their incorrect place to their correct place.  In the bottom photo you might be able to see that my left hand is behind the heddles, pinching the thread between my index and middle finger.  My ring finger is lightly pressed against the target empty heddle and when I put the hook through that heddle and pull the thread through it, the thread comes out of the incorrect heddle from behind.
It took about an hour (the length of the U2 CD I was listening to) to tie the repair heddles and move the threads, one by one, to their proper place.  As I completed each group of threads, I marked them off on the paper copy of the draft, in a different colour from the first go through so that I could keep track of where I was in the rather lengthy threading repeat.
This morning I will resley the warp, tie on, and with any luck at all weave a towel this afternoon.  And hopefully I didn't make any other mistakes while I was correcting the first one!

At this very moment, on my 60 inch AVL, I have the warp from hell. I am now on my fifth (?) rethread (I may have lost count). It is a very complicated advancing twill which I had to thread from the middle out, so that the gradient color fell exactly in the center of the threading. Just last night (at 10 PM), I said out loud. "My weaving would be so much better if I would stop making so many STUPID MISTAKES." Your words encourage me. I can finish this rethread and get the dumb thing wound on. Never mind that this has been a six month project so far . . . Patience,I tell myself, is a virtue that can be grown!