To Float or Not to Float 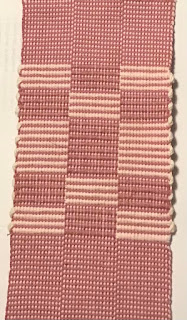 This is a sample of warp rep.  It was designed for a workshop topic where students would weave 'mug rugs' in weave structures and yarns suitable for table.  As a 'mug rug' or coaster, they still got a usable textile at the end (if they wanted one) but could quickly explore a variety of options.

One of the things that some people insist on as being 'essential' is floating selvedges.  By and large they are not particularly essential if you understand how to 'lock' the two different wefts at the selvedge.

So this little sample did not come with floating selvedges because I never use them.  Instead I would show the participants that they simply had to watch what was happening to the threads and then twist the two shuttles around each other to keep the pattern weft weaving right to the edge of the cloth.  As the blocks changed, sometimes you would twist the shuttles one way, then the other.  But it didn't take long to begin to see the pattern and just accommodate the sequence and keep things going.

Some people would insist you HAD to have a floating selvedge.  I told them to add one if it was important to them, but in point of fact it wasn't necessary for this (or most other two shuttle) weave(s).

Some two shuttle weaves are more consistent and the twisting remains the same throughout.  Some structures like warp rep change as the block sequence changes.   But it was pretty obvious that I needed to change the direction of the twist of the shuttles.  And then it remained the same for the duration of that block.

If someone prefers floating selvedges, then they should use them.  But they are not 'essential' to the weaving - unless the weaver wants to use them.  Nor is a plain weave selvedge 'essential'.  But that's another post, for another day (or check out what I've already written on selvedges.)

Email ThisBlogThis!Share to TwitterShare to FacebookShare to Pinterest
Labels: selvedges