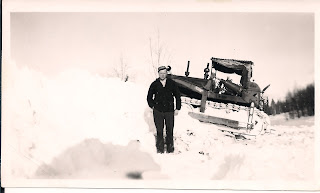 We got lucky on the trip to Vancouver.  The forecast had been warning of sleet/snow in the north and rain in the south, but it was very 'mild' and the drive went well enough.

There are still spots on the highway under reconstruction after the devastating floods of 20 months ago, in one spot there is still 'just' a bailey bridge.

But we thought about how impacted we are by such a disaster, how hard the crews who struggle to keep the roads passable work, and memories of my father who did that work for 20+ years of his life.

This photo is from the late 1940s I think, showing the standard of equipment available at the time.  Notice the open cab?  Heat?  Heat wasn't an option, let alone keep the wind out.

I remember him in the early 1950s getting ready to head out to the highway getting dressed against the cold, given there was no heat in the front end loader or grader, or plough or which ever piece of machinery it would be his duty to drive that day.

He would don a set of wool Stanfields, two if it was really cold.  He had a 'boiler' suit that was insulated - an adult version of the one piece snowsuit kids wore to play outside in.  Two pair of wool socks, wool felt 'packs' inside his insulated boots.  He had a felt hat that had a flap that folded down to cover the back of his neck and ears and a bill to protect against the oncoming snow/sleet.  Lastly he had wool gloves and a pair of thick insulated mitts, leather exterior to cut the wind.  I don't remember a scarf, but expect that mom would have knitted him one.

And off he'd go for his 8 hour shift, which sometimes extended beyond that if the roads were really bad.

Because even in those days, people travelled mostly by road, whether it be by individual vehicles or bus.  And they had to do their best to keep the roads clear for as long as possible.

I think about how uncomfortable all of that must have been.  How awkward.  And how my dad (and every other man, for it *was* only men in those days) were facing the same danger - hypothermia - and what they needed to do to protect themselves against the elements.

I have never forgotten or lost the 'respect' I have for cold weather.  Even though the weather wasn't supposed to be terrible, even though we had heat, even so, we both tucked our winter parkas with heavy mitts, scarves, hats, into the back of the van, even though we both had lighter winter coats we wore.  And we wore winter boots for the drive, not just shoes.

We never set out on a long winter driving trip without protection.  And we never let the gas tank go below half full, especially along the stretches where there are few options to refuel.  Because you never know when a rock or snow slide will cut the road, or the weather conditions worsen to the point where it becomes too dangerous to press on.  Or, oops - you hit a patch of ice or slush and wind up down an embankment.

Stay lucky everyone.  Increase your luck by being prepared.