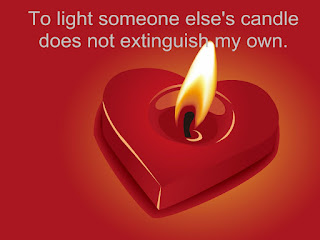 I use this image at lot, as you know, in no small part because it is a core belief.  No one gets through life without help from others and essentially, our job (if you will) is to help others as much as we can.

So when other weavers give me feedback that lets me know I am on the right track when I'm planning on doing something, it means the world to me.

People have told me I'm 'intimidating'.  Which always kind of stops me dead in my tracks.  Intimidating?  Moi?

A few years ago a high school classmate reached out and connected with me and as part of our reminiscing they mentioned that other classmates assumed I had my 'shit' together (I'm paraphrasing).  The reality was so far from what *I* felt in high school, I was a bit taken aback and simply burst out laughing.

The first time someone referred to me as an 'expert' I literally cringed because I am well aware of how much I do NOT know.  It took me years after getting the 'master' certificate from the GCW that I was finally able to feel at least a little bit comfortable in the role of 'master'.  And I did that by recognizing that a 'master' simply does not know 'everything' but just knows enough to begin to fix mistakes and chart a path that will lead them to success (however one defines that) more quickly than someone with less experience/knowledge.  And maybe, because they have made so many mistakes themselves, they know the potholes and can avoid them.

Over the last few days I reached out to a few people who I trust to tell me the truth about my essay project and so far?  The response has been positive enough that it is now a 'real' project.  I do not, at this time, have a deadline by which I want to have it ready, but I feel comforted enough by the feedback I asked for, plus unsolicited feedback from another experienced weaver whose opinion I trust, to begin to be more serious in my objective of peeling more layers off the onion of knowledge.

As usual it will be a niche book for a very niche audience. It will not appeal to all weavers because not everyone wants to understand the nuts and bolts of the craft in the way I did - and still do.  And frankly, in the 21st century, there is no need to worry about the size of the audience for such a publication because I'm not a 'real' publisher and online publishing makes it economically feasible to offer such a small market a 'book' tailored to them.

In large part my desire to do this is based on the fact that travelling long distances is no longer in my future given my health and covid.  As I deal with the roller coaster of brain fog, writing is much better for me than trying to be 'on' even for Zoom presentations.  Saturday I felt pretty good and the usual jolt of adrenaline did the rest.  The brain fog wasn't too bad and I don't know that anyone realized that at times I was mentally scrambling to find the word(s) I wanted to use.  And at the end, the chair of the St. Louis guild let me know that the in person crowd gave me a round of applause.  :)

So, to the people who lift others up?  Thank you.  To those who lifted *me* up over the past few days?  I cannot tell you enough how much it means to me.

Dear Laura, I have never found you intimidating, even when I once briefly met you in person. I have consistently found you to have common sense and in my several decades as a weaver, you have been my main influence. You encouraged me to look at what I was doing and why, and to not be afraid to adapt if I found a better way. Yours is the name that comes first to my mind when I think of modern weaving giants. I don't mean to freak you out! Those of us who have been on the internet since the beginning have found you a never-ending source of good advice, not MUST and MUST NOTS! I frequently refer to your posts on the old weaving lists and have them printed out to save. Thank you for helping me and many many others on our journey.

I am not a weaver, but it still makes me happy to know you are considering writing another book. Your explanations are always clear (although sometimes I need to look up terms because I am NOT a weaver), and you write very well. It's not enough to 'know' something - if a person can't express him/herself using words, writing is pointless. So go ahead, write! Your writing will be helpful to people, even if your target audience is small. I enjoy reading your blog just BECAUSE you write well.
StephanieW

Thank you, both of you. For years I wanted to be a writer, but did not fit into the mold of a novelist. As I began teaching weaving, needing to write class handouts, then articles for weaving magazines, I began to realize that I AM a writer - just not a novelist. So a 'book' of essays seems the next logical step. It will be like writing this blog, but with the ability to do longer posts, so to speak.

It's a bit daunting, nevertheless, and now I've made the decision I find myself distracted by more pressing deadlines, but the idea is in that pot on the back burner, and I'm pretty sure that once I begin, it will come along. In the meantime, I will continue to be aware of conversations in the larger weaving world which offer grist for the mill (to mix a bunch of metaphors...)