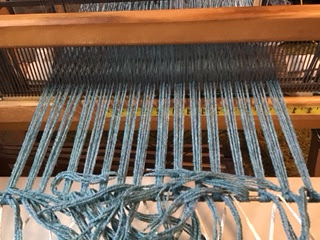 It started with pressing a batch of towels, which took longer than 'usual' because they were a bit on the wet side.  Plus there were 16 to do, not 8 or 9, which has been my 'usual' batch of late.  However, the fact I was able to do all 16 in one go was an indication of slow improvement - although I'm paying for it now.  I should have stopped at 12, but by that point I was soooo close to finishing them all I pressed on.  (Sorry {not sorry} about the pun.)

After a long break for lunch I headed back down to the studio and started clearing a path through the rubble.  The press was cold so it got put away on the floor and I worked on crunching numbers until I figured out the best approach for the sampling I need to do.  Since I'm expecting more ghost weaving work to do as soon as next week I need to stay on top of my deadlines or I won't get everything done.

With numbers crunched and a couple of plan Bs for the two warps that are next, I wound the two warps, then rough sleyed one of them before I took another break.  My feet were really not happy by this point, but never mind.  That's what Tylenol is for, amirite?

It was a fairly short break because I wanted to beam the warp and maybe even get it threaded.  So again, I pressed on.

Sitting to thread was welcome and with such a narrow warp and 'fat' threads, the threading went quickly enough that there was plenty of time to sley, too.  At 8 epi, I would have used the 8 dent reed, but really the four was fine and took half the time.

So there it is, all tied on, ready to go.

I couldn't face getting down on the floor to put the tie up back to my default - I had to change it for the last set of samples - so that will get done tomorrow morning.  Or maybe tonight when I go back down to shut the studio up for the night.

We had a bit of a reprieve from the smoke today but the temps are high, 28C last time I looked.  Might be higher now.

I'm hoping to get the 8 samples I need woven tomorrow, but if I don't get all of them done I will make a dent in them.  And then the next warp, another 8 samples.  After that, I'll put a cotton warp on.  I've already decided on the threading, just need to crunch the numbers.  It will be a shorter warp as fewer samples will be required and should go fairly quickly as well.  If everything goes smoothly, the first set of sampling for the Next Big Project can easily get done in the next few days.