Proprioception, or kinesthesia, is the sense that lets us perceive the location, movement, and action of parts of the body. It encompasses a complex of sensations, including perception of joint position and movement, muscle force, and effort. 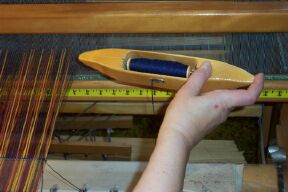 I didn't know what the word proprioception was until someone said I had it.  It's a 'fancy' word for body awareness, but not just being aware of one's body, but how it fits into the world, how it interacts with tools.

I came to weaving having been coached in various activities, and perhaps that stimulated my awareness.  Or perhaps I always had it and the coaching just enhanced it.  But regardless, I came to weaving with that awareness already fine tuned and when I began weaving with the express purpose of earning an income I realized very quickly that I needed to fine tune my movements.

So I analyzed what I was doing and constantly made tweaks in things.  I was fortunate in that I'd had a good introduction to ergonomic practices, so I didn't have to unlearn too many 'bad' habits.

Over the years I paid attention to how other people did things and when I saw techniques or tools that I felt would be 'better' than what I was doing, I took the time and effort to adopt the new information, tools, motions into my own practice.

At the same time I was trying to protect my body from repetitive stress injury because I also came to weaving with pre-existing conditions - injuries sustained before I began weaving, then another whiplash injury when I was in my 40s.

I've mentioned all this previously, but new readers don't necessarily have the time to go back in the archive, hence the quick recap now.

When I teach I try to convey to students how they must pay attention to their bodies.  But I also now know that not everyone has my level of proprioception.  So I explain, as best I can, how and why it is a good idea to work *with* one's body instead of against it.

People also tell me I have a way with words, so I use my words to paint pictures while I do the motions, explaining what is going on in my body as I hold the shuttle cradled in my fingers, as opposed to holding it 'overhand'.    And so on.

Recently I saw someone comment, with photo showing what they were talking about, that when they weave they get blisters on the first knuckle of their finger.  I thought about that for a while wondering how on earth they could get a blister in that location, then realized they must be holding their shuttle overhand.  Because when I hold my shuttle underhand, by knuckles are rarely in contact with the reed.  Another argument for cradled in the hand, not held overhand?

Just this week, two people complained about how awkward and uncomfortable dressing the loom is.  Yes, it can be!  Especially if you are dealing with a 'broken' body.

Try to find a loom that 'fits' you.  Not all looms are 'equal' - some are more accommodating than others.  Some are taller or shorter, with more room between the breast beam and shafts, harder or easier to treadle.  The 'best' thing to do is try before you buy, but that isn't always possible.  My next best advice is to buy second hand, and give it an honest trial, then sell it if it isn't working in a way that is going to be acceptable for you.

Take breaks.  I know people like me say this over and over again.  We say it because it is true.  It is much easier to prevent repetitive motion injury than recover from it.  Once inflammation has set into the soft tissue it can take weeks, months, even, to heal.

Part of why I harp on this so much is that I hate to see people in pain.  I hate to hear that people cannot weave because of the pain.

Check out the tag 'ergonomics' on this blog.  Check out my You Tube channel.  Check out the class on Long Thread Media, or my class at School of Sweet Georgia, or my book.  I harp on this all the time because I so frequently see people struggling.

The word 'efficiency' has a bad connotation when all it means is doing something with the least amount of effort or excess motion.

In this day and age with personal time so scarce, it feels nice to go to the loom and walk away 45 minutes or an hour later, having made progress.  All I can say is, if you feel like weaving is just too complicated, too uncomfortable, too awkward, maybe it isn't weaving, but the particular processes you might be using.  There might be a better tool, a better process, a different way to do what you are trying to do.

MY way may not be your way.  But maybe you can find a better way for YOU.

Email ThisBlogThis!Share to TwitterShare to FacebookShare to Pinterest
Labels: Ergonomics, The Intentional Weaver