Those Pesky Selvedges (and what to do about them) 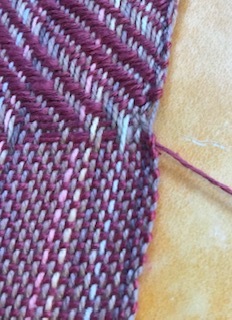 Selvedges.  The bane of most weaver's existence.  Or at least their weaving practice.

So much emphasis on achieving 'perfect' selvedges.  So many ways they can go wrong.  Yes, even for me, if I'm not paying attention.  Or get lazy.

Mostly my selvedges are pretty straight. 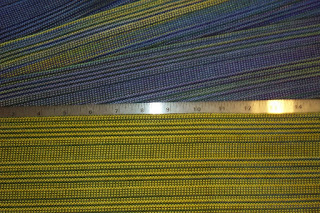 On these plain weave scarves above, the selvedge is about as straight as a ruler, as they say. 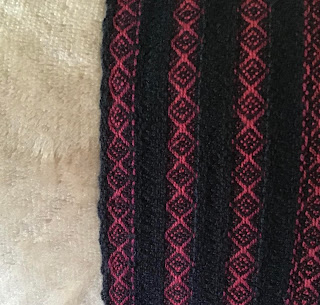 This one?  Well in fact while the web was in the loom, the selvedge was as straight as the textile in the photo above.  BUT!  The weave structure was such that after wet finishing little scallops formed along the length of the cloth.  Did I fuss about that?  No.  No, I did not.  I had formed the selvedge straight in the loom but the dynamics of physics entered the scene during wet finishing, allowing the threads to move to areas of least resistance and the result was this little, consistent, scallop along the edges.

As I dig deep into the principles of the craft I find myself connecting the dots in a conscious way, instead of the mostly subconscious way I have adopted over the years.  Mostly I learn through the process of observation and analysis.  When I do this, that results.  It is only now that I am attempting to pass my knowledge on to others that I need to begin to take that knowledge out of my observed experience in order to let people know what is happening in order for them to also learn from their observed experience.

By understanding the physics, the *science* involved in the creation of textiles, they can then work out the best way for them to approach the learning of the craft.

I am hoping one of my students will write up their journey in acquiring knowledge, and if they do, it will be a guest post here.  (If anyone wants to do a guest post, email me laura at laurafry dot com.)

So, back to the first photo.  I'm weaving on a 2/8 cotton warp at 20 epi.  The wefts are a 2/8 cotton for the hems, because that is overall thinner than the body weft which is a cotton flake.  The 'notch' in the cloth occurred as I was changing from hem to body while I also advanced the warp.

Why the notch?  Was it my shuttle handling?  Not really.  Did I leave too shallow an angle on the weft?  Nope (and that's not the issue most people think it is).  Was the beam poorly wound?  Not at all.  Was I beating on the 'wrong' shed? (open/closed/closing)  No, I was doing everything as I usually do.

So what happened?  I had not tightened the warp as much as I should have when I advanced the warp.  Then when I slightly tugged the weft to seat it around the selvedge, the slack in the warp allowed the warp ends to be pulled in too much.  I didn't notice until after I'd woven several more picks, then tightened the warp.  Just a wee bit - one or two notches.

When I had the correct amount of tension on the warp I could have unwoven the picks and settled the warp ends back where they belonged but I've done this before and I know that by the time I wet finish the cloth, hem it and give it a final hard press, that notch will be barely noticeable.

So I took the lazy way out.  I left it.  Once I've done the finishing I will see if I can find it again and post a comparison photo.

There are times when we know that a 'mistake' isn't that big a deal and won't affect the function of the cloth.  Then we need to decide how much effort we will put into making 'perfect' cloth.  And sometimes we need to know when good is good enough.  Now, if I was planning on entering something into a juried exhibition, or weaving for archival purposes, or as an heirloom, obviously my choices will be different than if I am weaving a humble tea towel, meant to be used daily.  That little notch won't affect the function of the towel in any way.  It won't even shorten the lifespan of the cloth.

Email ThisBlogThis!Share to TwitterShare to FacebookShare to Pinterest
Labels: selvedges

Hi Laura,
Greetings from New Zealand. Is it possible for you to send me your book?. I have just discovered your blog and it has helped me greatly. I have just purchased an AVL loom with all the bells and whistles and it is way beyond my weaving skill level but it may stop me getting Alzheimer’s !

You can order it on line through http://blurb.com

They will use the closest printing facility and you won't have to pay expensive postage from Canada. :) Who knows, they might even have a printer in NZ...