Use it or Lose it 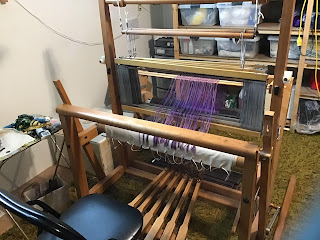 There is a cliche' that says if you don't use a skill, you will lose it.

The thing I'm finding is that the older I get, the quicker it goes.

To learn a new skill I tell my students (and myself) to try, mindfully, to give it 7 warps to see if the new skill establishes itself as something to keep.  These warps should be done as quickly as they can to cement the new process in one's mind.

However, I'm finding that as I weave less, I dress the loom(s) less frequently, the more I have to stop and think about what comes next.

Which isn't a huge problem, just a little disconcerting.

Having big deadlines that distract from the routine doesn't help, either.

One of the big distractions was my little flat bed press not working.  Thank goodness it lasted through the taping or that might have become a big problem, but it waited until I got home.  And then just...stopped.

Doug worked on it yesterday and then again this afternoon and it is working now but it's old and been used hard, and...the next time it breaks might be the end.

I dug around and found a 'cheap' press on line and they say they can ship immediately and have it to me by Nov. 7.  I'm in a quandary.  Do l spend more money on a tool that I already own - but may catastrophically break again soon?  Or do I bite the bullet and buy one now, while it is available - or gamble the old one lasts for as long as I need it to?

It's not a pleasant feeling.

Part of me keeps asking if I really need 'production' equipment, but the thing is, I simply cannot physically stand to do a hard press with a hand iron anymore.  I may not be able to stand to use the small press anymore either so I'm looking around the studio wondering where on earth I can set up a 'permanent' pressing area where I can sit down to use the press - whichever press I will have.

But I've just finished pressing the samples I wet finished yesterday and they are on the rack to dry.  The goal is to get them into the mail Monday or Tuesday, then box up the rest of the yarns for that project and put them 'away'.  Until needed the next time.  Maybe in January.

In the meantime, I got the silk warp beamed while Doug worked on the press, and now I'm going to take a wee break, have a snack, then go sit and thread.  I should be able to do the threading and who knows, maybe even the sleying today and begin weaving tomorrow.