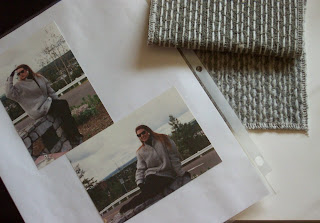 This is another of the garments done for the monograph for GCW.  I was exploring how to make fabric for warm clothing - jackets and coats.  Darlene sewed most of them.

The above jacket was used as my primary winter jacket for about 7 years.  The base fabric was, again, Harris Tweed, with a very softly twisted singles wool as the lighter accent thread.  The web was fulled heavily.

Since I rarely wear a commercially made winter coat more than 7 years, I figured I'd gotten good value out of it and it was time to retire it.
Posted by Laura Fry at 3:16 PM

I am loving these posts of your
garments. I originally started
weaving because I wanted to make garment fabric and somehow got really
sidetracked! (Way too many blankets
and tea towels). I'm feeling new
inspiration. Thanks :)

Thanks Judith, the really nice thing about these coats is that I have actually worn some of them out. :)
cheers,
Laura