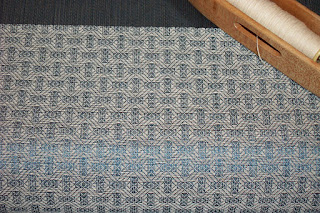 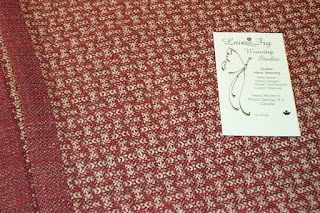 ready to go
There are certain weave structures I like to weave - as you may have noticed.  Wall of Troy is one.  This woven illusion is another.
They are both in the twill family.  Wall of Troy can be done on four shafts.  The woven illusion needs 16.
I've done the illusion in many different textiles, from scarves to tea towels.  On one level I like the visual pun - the illusion of a plain weave structure woven on 16 shafts in a twill.  It takes a weaver to really appreciate it, though.  Non-weavers don't 'get' it - they just see a sort of interesting visual texture, I think.
Quite often I weave the woven illusion in tea towels to use as hostess gifts for when I'm travelling to teach.  Since I'm nearly out of them and I have a longish teaching tour scheduled for next March, I figured I'd better make some more, hence the blue ones.
The blue and white towels are 100% cotton.  The warp is 2/20 merc. cotton at 30 epi with a 2/15 unmerc cotton as weft.
I used to order my natural 2/8 cotton directly from a spinning mill in Ontario.  Occasionally they would make a mistake and I'd get 'odd' yarns like this 2/15 cotton.  And the singles 6 that I've been offering for sale here for collapse effects.﻿
The red is also 2/20 merc. cotton at 40 epi with a fine linen for weft. The cloth is much stiffer, partly due to the higher density, partly due to the linen. I'm donating two of the red ones to Weavolution for a fund raiser later in the year.

diversified plain weave
﻿I'm also donating the above scarf to Weavolution as a fund raiser.  I know the photo looks a little blurry - that's partly because it's woven from rayon chenille and 2/16 bamboo rayon.  Really hard to get good focus on rayon chenille!
Anyway, if you're a member of Weavolution, watch for the announcement of the fund raiser.
Posted by Laura Fry at 1:21 PM