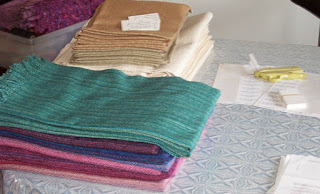 When you are weaving as a way of earning your income the job isn't finished until the goods are sold.

With the first craft fair of the season coming up it's time to get finished, finished and hope for some sales.  I've been remiss in keeping my Art Fire store up to date - but there is no way I can miss out on the craft fairs.  For one thing, they have been booked for months and they are an unparelled opportunity to make about 75% of my income in 1/12th of the year.

As you may have guessed, earning one's income from making and selling textiles is a cyclical affair.  The income dries up right after Christmas - although the expenses do not.

And then there's the fact that I don't do inexpensive shows - rather I do shows that generally need to be applied to and paid for months in advance of the event.   And very high prices for the spaces, too.  But these are also the shows that appeal to people with disposible income, generally willing to pay a premium for hand crafted goods.  And I rarely hear the phrase "Your prices are too high."

Learning how to budget is crucial in this business.

Anyway, the textiles are not completely done until they have their care/hang tags attached as well as their prices.  I subscribe to the policy that everything ought to be priced if you want to sell it.  Since my prices are fairly high, if there is no price on it people will either assume that it isn't for sale or they can't afford it.

This has been my logo for a number of years.  I was told the last time I ordered cards that the printer was going digital and would no longer be using an offset press and that I would have to re-design my cards.  They have had a black logo with a slightly off set silver line around them.  Quite elegant looking I think.  But apparently this is something he can't do digitally.

That's a job for after the craft fair season, however.  Fortunately I've enough hang tags to deal with the current inventory.  But first they have to get attached.

You set me up. I kept looking for "until it's wet finished." You've indoctrinated me well. And over the years I've followed you, I've become a weaver with stuff to sell, your distant step-child, twice removed :)

Is there somewhere that tells more hints and more advice on how to be a successful seller of hand-wovens? I'm starting out, but hubby wants me to actually be able to do some shows and see if it makes me money. :-)
Thanks
Martha

In old issues of Interweave Constance LeLena had a great column Professional Pursuits. Or click on the 'business' label (or craft fairs) on the right hand side of the blog. Or email me with questions. I quite often do guild programs about business issues - especially pricing. :)

Also on my website you can read a bio I did for the Quebec conference. I talk about the journey (with pics)