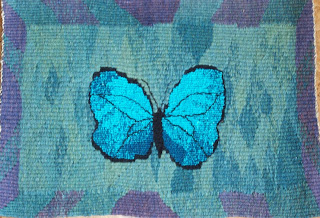 As part of the master weavers certificate, the candidate must weave a tapestry.  It was actually the tapestry that delayed the submission of my fourth and final level for consideration by about two years as I struggled to get it woven.  Why?  Partly because I don't fancy myself an artist and partly because progress seemed so very slllloooooowwww compared to what I was used to on the big loom(s).

The border was free form (no cartoon) as was the background.  For the butterfly I did follow a cartoon.  Since I don't draw very well I purposely made the whole design a little - um - rustic?

The yarn was a blend of silk, wool and linen for the background and silk for the butterfly.  All the weft yarns were dyed by me.  The warp was a linen rug warp.

I used one of the techniques in Peter Collingwood's rug book for finishing off the ends and sewed all the warp ends back into the textile.  I also sewed in all the weft tails so that the back side looks about the same as the front.  There were some quite long slits in and around the butterfly because I wanted as clean an edge as possible (although if I'd been a more skilled tapestry weaver I could have probably dovetailed or in some other way joined them during weaving.)

But in the end the tapestry had become such a road block that I just kept telling myself that all I needed was a 'pass' and to get it finished!

There are 3 judges for the master level.  I don't remember what marks they gave me although I seem to remember that one of the judges was not at all happy with my efforts.  But the combined score meant that I got that pass.
Posted by Laura Fry at 8:47 AM

Thanks Laura
This is an encouraging story!
Considering there are only 29 Master
Weavers in the GCW I guess a lot
of us never get enough courage
to send in projects! It's a very
intimidating and humbling process
to work through the testing.

Yes, it is, but it is also very satisfying to go through the exercises because you learn so much. :)

Beautiful colors. I especially like the borders and background. I have a friend who is working toward the HGA certificate, and tapestry has been her bugaboo.