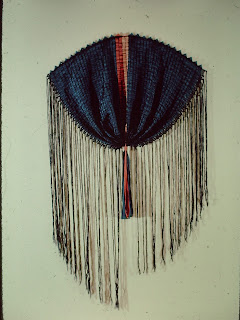 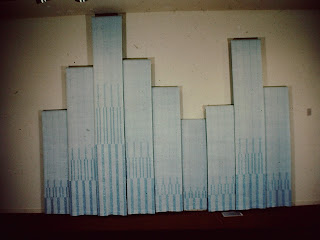 Water Sparkling Falls
Early in my weaving career I wove everything.  And I do mean everything.  If it could be made from thread, I made it.

In the early 1980's I even had a solo exhibition at the Prince George Art Gallery.  At the time I was known mainly for my functional household textiles and the curator (who had taken over the job after my show was booked) was very, um, trepedatious, about what my exhibition would actually be.  He probably envisioned stacks of placemats and table runners.  :^)

Flying Free was woven with a linen warp and gross grain ribbon and measured about 4 feet wide.

Water Sparkling Falls is huge.  I think it was around 18 feet wide and nearly 10 feet high.

I had a long conversation with another artist (painter) who told me that some of my pieces absolutely broke design 'rules' but that they worked anyway.  I took that as a compliment.  :)

Interestingly my work seemed to appeal most to a younger audience.  An English teacher (married to a weaver) brought his Eng Lit classes to the art gallery and then had his students write a 'review' of my show and encouraged them to make comments in the visitor log.  Some of the comments were very thoughtful and saw through to the intent behind my making the pieces.

But the exhibition was an enormous effort.  In time, in money, in emotional investment.  I realized that my primary goal was to earn an income and that wasn't going to happen with textile art.

Or at least, not in this town.  Perhaps if I lived in a large metropolitan centre I might have had more of a chance to sell textile art.  But here it just wasn't going to happen.  And so I turned back to weaving functional textiles.  To making them with as much beauty and grace as I could.  And ultimately we earned our income solely from the production and sales of functional textiles for 9 years.  Until things changed and I needed to choose another path.  And then another.  And then.....

My life has been a series of paths, some of them wildly divergent from where I had been heading.  Sometimes I consciously choose a new path, sometimes life set up roadblocks and I was forced onto a different path by necessity.  But one thing I can say - it's been interesting!

Currently reading Cetaganda by Lois McMaster Bujold.
Posted by Laura Fry at 10:05 AM