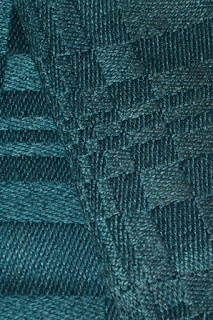 my camera didn't seem to like the royal blue of the yarn and the photo looks very greenish
As part of the fourth and final level for the GCW tests, there is a problem on satin.  It took me a couple of warps to get everything correct.  Fortunately I had quite a bit of hand dyed silk so was able to set the 'failed' scarves aside for sale and keep trying.

Since my loom has 16 shafts I used two 8 shaft satin blocks.

For the final level there are fewer woven samples in the problems and more written/theory work, although of course the candidate is expected to weave all necessary samples for their monograph/research topic.

When I did the tests the major project was called a monograph - I think the terminology has been changed to research project.

At last count I believe that there have been a total of 29 people who have achieved the Master level, the first two being Mary Black (yes, that Mary Black) and Mary Sandin.  The most recent was Helene Ruel who submitted her test levels in French.  The first, I think, to have submitted in French.  I think I've blogged previously and listed all the master weavers and their monograph topics, several of which have been turned into books that have become classics in the handweaving world.

The tests are not restricted to Canadians.  There is one American GCW master weaver and I know that others from outside Canada have done at least some of the test levels.

Marking duties are shared out amongst the current master weavers and from time to time I have had the priviledge of marking a test level.  The test administrator mails the test to the marker and it is all done anonymously.  The only one who knows the names is the administrator.

Doing the test requirements was most definitely a challenge and very intimidating.  One of the reasons I did the tests was to get a broad over view of the craft.  I was 'forced' to deal with weave structures that didn't particularly appeal to me and strive for a level of perfection that was, in many ways, much higher than my inclination.  I am not a perfectionist!

I was determined to learn as much as possible and working on the tests kept me focused on exploring and learning.  And, having done the problems, why not submit them for marking?  A couple of times I had to re-do a test problem and I learned even more because of that.

Currently reading The Tipping Point by Malcolm Gladwell
Posted by Laura Fry at 10:14 AM

Good for you. And the "that Mary Black" gave me a nice smile this morning. At one point I was working through both her book and Collingwood's rug book. I made a fair bit of progress on both. Would love to do more. Not this week!

I know another Mary Black, also a weaver. :) MB's book serves as a good resource for anyone doing the test levels. Mary Sandin also did the Boston mw levels. Dini Moes did the GCW, Boston *and* HGA's certificate of excellence.

These posts are encouraging. I've
got out the test booklet and
my husband is rolling his eyes and
saying here we go again!

If you just focus on one of the problems at a time....like eating an elephant - one bite at a time. :)

I like that there isn't any pressure, that a person can just do the problems as they fit into their life and then submit in the fall for judging. And the GCW tests aren;t terribly expensive, either. :}