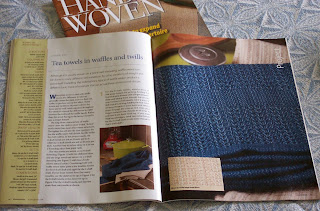 Handwoven arrived while I was away.  I'd hoped it would come before I left but it was nice to pull it out of the mailbox yesterday.

I am still settling back in after being away for a week.  The van needs to be unloaded and we don't have sound on the computer.  Doug will have to sort through the rat's nest of cables on the floor and pull out the ones that don't get used anymore so it will be easier to set the computer up after road trips.  (Yes, my computer went on the road trip too - my computer guru lives far, far away!)

After I have coffee I'll try to get the wireless system working, too.  Right now the iPad is a really expensive solitaire game as a friend commented.  :^)  And Mahjong.  Until I get the wireless going I can't download books, apps, etc.

I've also received permission to have a yarn/fibre sale at the guild room during the Spring Arts Fest on June 9 so I need to sort through the boxes of stuff to see what I want to lug up the loooong staircase to the room.  No point taking things no one will be interested in buying.  Talked some of the guild members into coming to do demos, too, so there will be some small looms in operation and at least one spinner.  Hmm - maybe I should bring my wheel, too?  It hasn't been out of the box for a few months and there is allll that fibre!  Tempting!  On the other hand, there is alllll that fringe twisting, too!  Decisions, decisions...
Posted by Laura Fry at 10:03 AM

I was SO HAPPY to see your article in Handwoven. You had suggested that I use twill hems on waffle weave towels, but I only have 8 pedals (my waffle weave used 6 pedals). Now I have the answer - a 4-pedal waffle and 4-pedal twill. Thanks so much!

Either that or a skeleton tie up, depending if that will work on your loom or not. :)