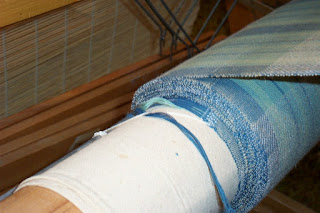 One of the things that I don't think is mentioned very often is that of build up on the cloth beam when a long-ish warp is woven.  This warp is 13 meters and at this point there are about 11 of them wound onto the beam.  The cloth has built up about an inch in thickness so far.

As the diameter of the beam changes, so does the tensioning of the warp change.  With that much cloth rolled onto the beam the tension seems to get a bit 'soggy', probably because the cloth itself is 'soft' and somewhat giving.  Plus the change in diameter means the ratio between the cloth built up and the brake has changed, too.  (This is not an issue with an AVL loom that has a separate cloth storage roller and sandpaper beam.  On these looms the tension is only held between the warp beam and the sandpaper breast beam - the build up of cloth on the storage roller has no effect on the tension of the warp.  I can store about 40 yards on my AVL.)

When I weave a warp this long with all of the cloth wound onto the beam I find that I have to work a bit harder to set the tension on the warp - it feels like I'm putting more tension on it, just in order to achieve the same tension.  If that makes sense.  In other words, I have to pull on the handle harder, the tension applied feels tighter, in comparison to earlier on in the weaving.

If I don't get the warp tight enough the weft pulls stronger on the selvedge and little 'lines' appear because the weft has drawn the selvedge threads inwards more than previously.  Mostly this unevenness evens out during the wet finishing, but if it doesn't completely go away I don't worry about it too much.  Most people don't notice (unless they are weavers) and it doesn't affect the way the cloth behaves.  So rather than tie myself into a knot worrying about a little inconsistency, I just correct and carry on.  And try to set my tension better the next time.

I also find that with a wider warp the sweet spot is smaller.  By that I mean the placement of the fell line is best in a smaller area, which means that the warp needs to be advanced more frequently.  If not, small inconsistencies can develop at the selvedge.  It really pays to advance more often rather than try to force just a few more picks into the cloth before stopping. 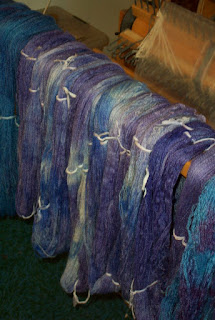 Claudia asked about my dyeing.  First let me explain that I don't try for level (even) effects.  Industry does that very well.  My dyeing is more 'impressionistic'.  For example, I feel that the above skeins sort of look like one of the hydrangea colours.  For this particular batch I started with a purple 'base' and immersed the skeins into the dye bath with the vinegar and let the skeins take up whatever dye they could, given the pot is stuffed pretty full.  Hence the paler, almost white areas.  Once the purple was set, I drizzled blue over the skeins in the pot, then dumped vinegar in on top of that.  That was again left to simmer and allow the dye to strike as and where it could.

None of these skeins is the same as the rest but since they were all done in the same dye pot (all except the skeins to the far right) they can all be used in a warp together.

The fibre is Blue Faced Leicester and is supposed to full really well.  I had a couple of skeins that were 'off' in terms of their yardage so one of them is being knitted up and will be tossed into the washing machine to full significantly for a bag.  I'll use some of the yarn to twist up a cord for it.  The goal is to have this done in time for the Alberta Conference in High River the end of this month.  Well, it's a goal!  If I don't have a deadline, I don't seem to have any incentive to get stuff done.  :^)

Currently reading Flowers for Her Grave by Judy Clemens - this is the 3rd in the series and I'm intrigued enough that I'm going to try to find the first two to get the back story.