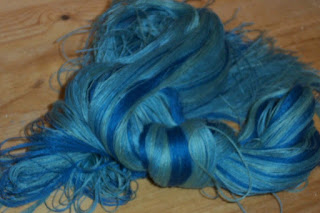 I had quite a lot of loom waste on this warp, partly because a section of it was used to weave samples and whatever was left was woven off in towels.  Usually I try to calculate the optimum amount of loom waste - enough to weave as many items as desired without an excess of warp left over.

From time to time a thread comes up on a chat group about minimizing loom waste.  How much should be worked into the calculation?

Well, as usual, the correct answer to that question is...(wait for it)...it depends.

Sometimes it depends on how much take up the warp requires - a warp faced cloth will take up more than a balanced cloth.  If the weaver hasn't allowed sufficient length for the warp take up they may not be able to weave as many items as intended and there will be a lot of loom waste - as in the warp above.

So how much yarn is actually there, anyway?  I weighed it and it is exactly 2 ounces.  At $16/pound (approximately) that means there is about $2 worth of yarn sitting there.

What I got out of the warp was sufficient samples to finish the run for A Good Yarn: Cotton plus 6 towels.  If I hadn't woven samples I could have gotten 8 towels out of the warp and the usual amount of loom waste.

One strategy that many new weavers don't think about when they calculate loom waste is that the longer the warp, the less loom waste as a percentage of finished cloth.  The above warp was 11 meters or approximately 9400 yards total.  The warp weighed about 1.5 pounds ($24.00)  With loom waste at $2,
the % of waste was 1/12th of the whole.  (Remember it would have been less if I'd been weaving all towels.)

If I had only wound a warp long enough for two towels plus loom waste, the % of waste would have been much greater.

So what prevents weavers from putting longer warps on the loom?  Sometimes they have difficulty with beaming a warp.  They have to deal with snarls and tangles, or they can't get consistent tension on all the threads.  Sometimes they plain get bored with doing more than one of anything.