On The Other Hand 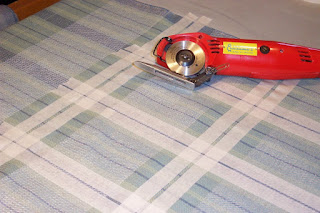 before samples, taped and ready to be cut apart using my electric rotary cutter

One of the joys of being self-employed doing something you love is that, well, you love what you're doing.   Most of the time.  ;)

On the other hand, when life tosses curve balls at you, there is no one to phone to book time off.  If you don't do it, most likely it won't get done.

Today was one of those days where I would have loved to have phoned someone to say I couldn't make it into work.  Instead I moped around a bit, then had a good talking to myself, explaining how there were deadlines coming up and they really could not be missed.

So down the stairs I went, finishing off the sample warp on the small loom, then cutting the before samples apart.  While that was happening, a small load of scarves went into the washer and drier and just before Doug got home from work, the after samples went into the washing machine, too.

Sunday I'm going to head to the annex to get some pressing done.

And sure enough, there wasn't quite enough cloth for the after samples, which I sort of suspected.  But I like this stripe design well enough that I'd decided to do another warp of it anyway.  So I'll finish the after samples (another 45) and the rest of the warp will be towels.

Just to make the day that little bit more annoying, I realized I'm running out of masking tape.  Since I'd just been to the store where I buy it, I could have stocked up while I was there, but no.  My mind was on other things.  Which means another trip on another day.  Curve balls.  Sometimes you just have to duck and head for the studio anyway.

Studio powered by Adele and Johnnie Reid
Posted by Laura Fry at 9:38 PM